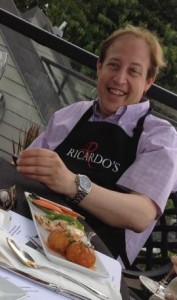 I went to a lot of different food events, openings and parties during 2012 in and around Vancouver, here are my top 18 standouts of the year.

1)  2012 Gold Medal Plates was the most amazing gastronomic experience.

2) From Farms to Forks was the most entertaining event at the coolest venue that brought together some of the cities best chefs, restaurants and breweries.

3)  Hy’s Steakhouse celebrates 50 years was the best Restaurant Anniversary Party of the year.

4)  Feast of Fields 2012 at Golden Ears Cheese was the best afternoon of eating and drinking in the outdoors.

6)  East of Main Café Opening was the best restaurant opening of the year outside of downtown Vancouver.

7)  Eating Italian with Ricardo’s was the best Media Dinner & Cooking Party of the year.

9)  East meets West at West was the best Culinary Adventure/Dinner with 2 of Canada’s best chefs.

10)  Sake Master Dinner at Ki was the best Pairing Dinner with Sake and delicious Japanese cuisine.

13)  Stags Hollow Tasting Lunch at Lift was the best Winemakers Lunch of the year.

15)  Cooking for a Cause Celebration was the most incredible evening of food and wine from some of Vancouver’s finest chefs outside of the city in the most spectacular venue.

17)  Joy of Feeding was the best afternoon of eating delicious food outside on a farm.

18)  Tasting Brunch at the Bibo was the best media tasting brunch with an extensive selection of delish food and drink.

Teacher Tong takes his Students on a Food Tour

Started off 2022 and I have been cooking more duri

I had the pleasure of having Chef John Bishop spea