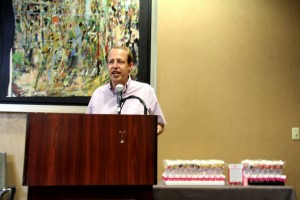 I went to a lot of different food events, openings and parties during 2013 in and around Vancouver, here are my top 20 standouts of the year.

1)    Brewery and the Beast was the best and most organized outdoor food event of the year.

2)   Feast of Fields at Krause was the best afternoon of eating and drinking in the outdoors.

3) Loden Hotel Celebrates 5 Years was the most fun Restaurant Anniversary Party of the year.

4) Languedoc Wine Bar Crawl was the most exciting media event of the year.

5) Cook the Vote at Pidgin was the most fun and tasty media party of the year.

6) Joy of Feeding 2013 was the best afternoon of eating delicious food outside on a farm.

7) Noodle Mania was the best food crawl eating noodle dishes around the city.

8) The Roof at Black+Blue Opening was the best restaurant opening of the year downtown Vancouver.

9) Railtown Caters Launch was the best catering launch party with the most delicious food and drinks.

11) Dish ‘n Dazzle 2013 was a delicious evening of food, cocktails and wines supporting the BC Hospitality organization.

13) Wine for Waves most delicious seafood and wine pairing event at the Four Seasons.

14) Chocolate Arts celebrates 20 years was the sweetest anniversary party of the year.

16) From Farms to Forks 4 was the most entertaining event at the coolest venue that brought together some of the cities best chefs, restaurants and breweries.

17) Tengumai Sake Dinner at Zest was the best Pairing Dinner with Sake and delicious Japanese cuisine.

20) Food Talks Vol 8 and 1 Year Anniversary was an amazing evening as we celebrated the most iconic women chefs in the city.

See all the other events I attended this past year.

Best Brunches in Vancouver in 2013