For my fifteenth brunch in this series, I was joined by TV Hosts Fiona Forbes & Mike Eckford at House Guest in Vancouver talking about TV, Life and more! 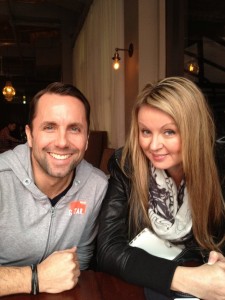 Fiona Forbes is a Canadian television personality who currently hosts the award-winning entertainment talk show URBAN RUSH, in Vancouver, British Columbia. Forbes received a degree in History from the University of British Columbia and had planned to go to Law School. Instead, on a whim she enrolled in the Journalism Program at The British Columbia Institute of Technology. She has also hosted numerous other shows including DAYTIME on the Rogers Network, AUTOMOTIVE MORNING on Life Network and BREAKFAST TELEVISION on City-TV. Fiona also does extensive work as a Master of Ceremonies for corporate events and is passionate about lending her talents to support many wonderful charities including the Canadian Cancer Society, the Children’s Hospital Foundation and Canuck Place.

Michael Eckford is a Canadian television personality who is currently co-hosting the entertainment talk show Urban Rush on Shaw Cable in Vancouver, British Columbia. Michael has been hosting television shows for fifteen years, twelve of them with Shaw TV. In 2012 he also became the Co-Host of the Bro Jake Show on CFMI 101 Radio.

How did you both meet? And was it the tv hosting that brought you both together or?

Both doing tv but not together, we met at brunch at Senior Frogs and then were paired up by producers a few weeks later.

Mike – No – I wanted to be a Firefighter – I was a volunteer firefighter for years in Roberts Creek on the Sunshine Coast and then I was in construction. I watched Sportspage which was a big influence for me.

Fiona – No – I wanted to be a Lawyer – I took a broadcasting course then auditioned and got a job on live tv. My father was a lawyer and also an actor.

How do you both keep your shtik in mode or better put your cool when you are co-hosting events and tv shows?

We usually don’t plan, we are situational doing stuff and things just come up. No good when we plan stuff.

What do you want your viewers to learn if you will from your show each day?

Fun, we laugh, interesting people that we interview, learn about a story. Learn more about their city and country.

You both done over 20,000 interviews, is there anything that has stood out for each of you from any or many of them?

Mike – ripped my pants once and they then stapled my pants together so that I could do the show.

Fiona – my shirt became see through due to the lighting just as we were about to go live.

Mike – Greg “Who’s line is it anyway” almost got into a fist fight with me.

Fiona – kicked a comedian in the crotch.

Mike – introduced –cock instead of cake 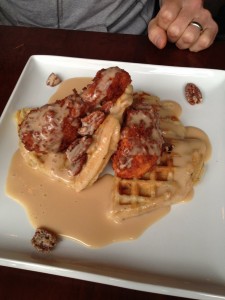 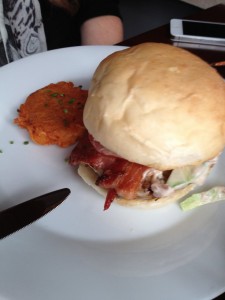 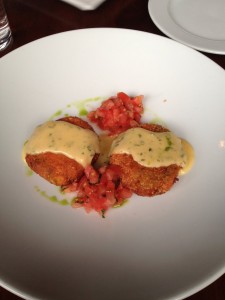 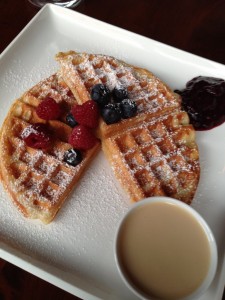 Mike had the had the Chicken & Waffles ($12) bacon & pecan waffles, yogurt fried chicken, cream cheese maple syrup ; Fiona had The Survival Burger (with no egg) ($13) and Richard had the Lobster Cake Benedict (without eggs) ($15) lobster & crab cake, tomato bruschetta, bearnaise and a Waffle ($7).

Has the format of your show changed from the beginning  to now?

Mike – big brother is in radio

Is there an event or two which you have hosted either on your own or together that has been memorable?

Michael tell me about your new radio host gig on the Bro Jake show, how did that come to be?

We have both known each other forever, Mike Reno did a year as co-host on the show and then left to go on tour. Jake asked me to fill in, I ended up taking it and do 6am-10am Monday-Friday.

What’s next for each of you or what’s on the horizon?

Mike – did a show on my birthday –the producer arranged for a Marilyn Monroe impersonator to come on the show to sing Happy Birthday –we never knew if it was a man or a woman, the Producer couldn’t see so we never knew.

When you first did the show did you both get paid?

No for a year we did not get paid, that is what you have to do, it is glorified interning – volunteering was key to getting the audition.

For Reservations, don’t call them, best to email reservations@housexguest.com

Ned Bell is Dining Out For Life’s Honourary Chef