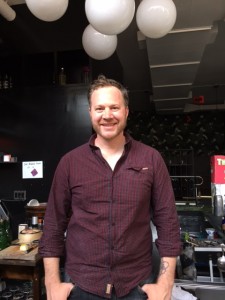 Tarquin had been working in a hospital doing recreation therapy for many years. In 2006 he made a life change to be a server in an upscale diner in Edmonton. He yearned to learn about cocktails, travelling to Scotland to learn everything he could about Whiskey and Bourbon. He then moved to Vancouver where he worked at RTL, then on to West where he worked with David Wolowidnyk. In May 2012 he got stabbed while working at a local bar which affected him, he then moved back to Edmonton. After some time away, he returned to Vancouver to become the Bar Manager at Bambudda in Gastown where has been ever since.

He made some of his new favourite cocktails with recipes. You can follow Tarquin on twitter @livelikeburning

Desperation mainly, initially. I needed a large amount of money in a short period of time. I started in the hospitality industry working 5:45 am til noon in a Diner, 1-11pm in a hospital and cleaning windows any time I had a free minute. The love for hospitality and the culture and craft of bartending happened gradually.

Where did your Scotch education begin?

It started when my dad left me a bottle of Scotch. It was the last gift he ever gave me. I wasn’t a fan, at first, but because it was from him I sipped it slowly and deliberately. Appreciation grew, books were read. More whisky tasted. Then I sold almost everything I owned to head over to Scotland to explore the country and the flavors properly.

Tell our readers about JustCocktails.org

We write. We create. We consult. We are storytellers and industry insiders. We seek to help encourage the growth of the global bar community and to give enthusiasts an expert insight into that community.

The first request for a Suffering Bastard stood out in my mind, because prior to that I had never thought much about blending two primary spirits. The combination of gin and a dark spirit, such as Scotch came as a revelation. When Vancouver Tourism asked us to riff on the concept of smoke and mirrors it was fun to come up with the elements in the Powell Street Sour (recipe attached)

I went to school (briefly) to become a chef, in the late 1990’s. I left hospitality for many years, but continued to gain customer service experience. I got into serving in late 2005. I took an interest in bartending around 2007. Then, after years of travel, reading, tasting and practice – I called myself a bartender for the first time in 2011. I have traveled widely to sit at many notable bars and have apprenticed under many industry greats in cities such as New York, San Fncisco and Paris. Locally, I learned a lot by being trained by Trevor Kallies (Donnelly Group) and David Wolowidnyk (West)

Start with a classic. Consider new ingredients and newly available products that have come to market. I guarantee if you makes a proper Manhattan, for instance, enough times – you’ll start to see inspiration to do something new that is balanced and delicious and has a built in clientele for it. I’m continually inspired by the community of bartenders around the world that we interact with on Instagram. I will see a new flavor pairing or new garnish – I will borrow from that and seek to put my own spin on it.

I’d encourage any bartender/enthusiast to look at the menu for the newly opened Aatxe, in San Francisco.

Working with Dominic at Bambudda is an inspiration. He is wise beyond his years and loves to tinker and do science experiments incessantly.

As we say at justcocktails, we are ‘Dedicated to better imbibing’ and as Philip Duff famously put it, ‘it’s not about the drink’ – I also love how Jim Meehan of the world class PDT bar, in NYC, put it, “We serve people drinks, not drinks to people”. That’s why I call myself a bartender, not a mixologist. Mixology is a component – along with the setting, hosting, conversation, listening and study of our guests.

I try to never take for granted that people are spending their hard earned money to come visit us.

Any Sundae at Rain or Shine. Kale salad at Annalena. Pork & Foie Gras dumplings at Bambudda. Breakfast sandwich at Aphrodite. PannaCotta at Oakwood Canadian Bistro. If I could have all these things in one day, I could die happy.

We look at what the kitchen is putting on their menu. We take our science cues from people like Dave Arnold, at Booker & Dax in New York. We strive to be different from the other great bars in Gastown. We shop in Chinatown and look for uncommon pairings that still utilize the framework of a balanced classic.

Mainly, we seek to be fun.

Tell our readers about bitters in cocktails

It’s the seasoning to the meal. It’s about adding hints of sharp flavor to nuance the three primary stages to a good drink.

I think of drinks as a perfumer would think about a good perfume. It should have an aromatic top-note that flares off quickly. A mid – which is the body, structure and mouthfeel. Then the dry down, which is the lingering notes on the finish of a drink that stay with you. Balance these, with the help of the right bitters and you have a deeply satisfying drink that wouldn’t be possible otherwise.

Our New Gwei Lo is an example. Without bitters it’s basically just Rye, Lime and sugar but we add extra notes of pineapple, star anise and dark chocolate. That takes it from good, to stunning.

My favorite thing in the world, after a nice whisk(e)y, is a shot of amaro paired with the right beer.

What are your thoughts about Shrubs?

Essential to a bartenders skill set.

Balance the right vinegar to the right fruit and you get a shrub that adds concentrated, bright fruit that tastes fresh and delicately sweet.

I think 2015 will see them move to the mainstream more than ever.

That, and I’d love to be a journalist.

I once made a foam out of maple and morel mushrooms that went on a sour gin cocktail that had a mixture of vine flower liqueur from Cognac and hand foraged Alberta wild rose syrup in it. Maybe not unique, but I love playing with elements of earthiness and floral. Leathery flavors and citrusy spice.

That’s where the Powell Street sour came about.

La Parisienne (classic), as made by Shawn Soole (formerly of Little Jumbo)