With many cooking classes taking place around the city, I wondered what the differences were between each of them, and what made each standout. Some classes include copies of the chefs cookbooks, author signings, have celebrity chefs, or are fundraisers for non profit groups. I decided to set out on my own adventure and partake in some classes around the city.

Here is the first of many classes that I will be taking. The Arts Club Theatre Celebrity Chef Series is a fundraiser and takes place in private homes around the city. 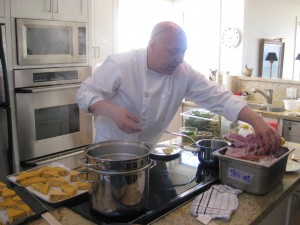 On May 11th, I had the opportunity to be a part of an incredible cooking class, with one master Chef, 15 guests who were the chefs assistants and the hosts who provided their beautiful home for the class in Point Grey. I had heard that Arts Club Theatre had been running a series of Celebrity Chef Cooking Classes as part of an annual fundraiser for the past 8 years but I had no idea what to expect.

Each three hour class begins with guests treated to wine in the kitchen of a beautiful private home. Each guests then becomes involved as a Sous-Chef as they assist in the preparation of a delicious three course meal. Celebrity Chefs share their passion and expertise for food and cooking, providing guests with hints and tips and answering their questions.

The night that I attended the theme of the evening class was French Cooking in Provence and Chef Anatoli Belov was the celebrity chef.

Our menu for the evening,

For the 1st course, he made a Spot Prawns with Fennel Green Olive, Orange Salad

For the 3rd course, Shortbread Cookie, with marscapone whipped cream and berries with a lemon honey sauce and a touch of mint 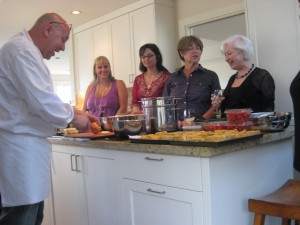 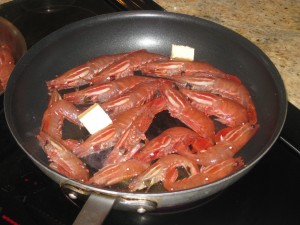 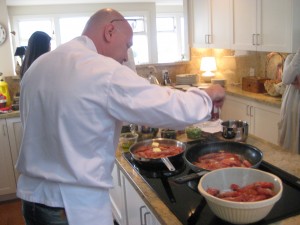 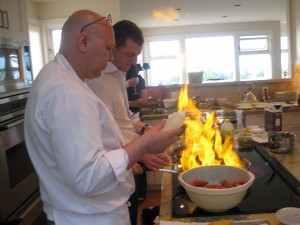 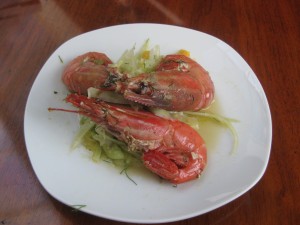 Our evening began as guests arrived and where greeted with a glass of white or red wine, thing mingled meeting the chef and the hosts. Chef Anatoli was already showing off the fresh caught Spot Prawns that came from the ocean that very same morning, he told us all how to cook them and that he preferred to leave the spot prawns in their shells so that the moisture and flavour remains through cooking. Before finishing of the spot prawns he dashed some Pernod over the prawns and flamed them. A couple of the guests volunteered to be his personal chefs assistants and off they went into vegetable cutting and then into plating. Our first dish was absolutely delicious and the spot prawns tasted so good and so fresh with the salad as the accompaniment. 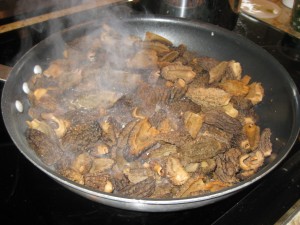 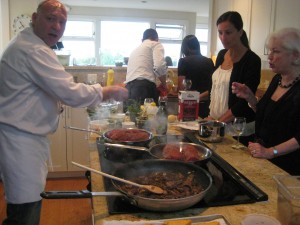 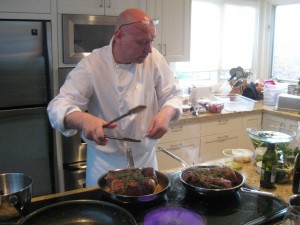 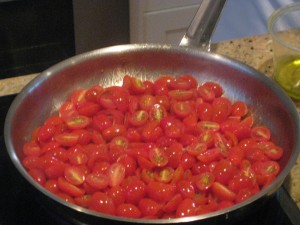 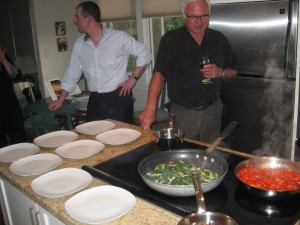 Finishing up the Entree 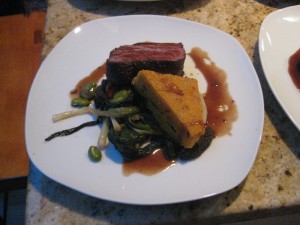 On to the second dish and the chef was hard at work in preparation, with the locally grown morel mushrooms in the pan cooking, the beef being pan seared and then in the oven for finishing and the ramps being cooked, the cherry tomatoes in the pan, the Polenta put in the oven to bake, all the ingredients were coming together and the helpers were helping. Guests were mingling, asking questions, participating, sipping on wine and it was all good. I enjoyed this dish as much as the first dish, this was quite different but it had great flavours. 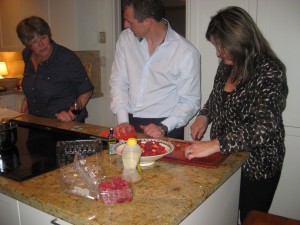 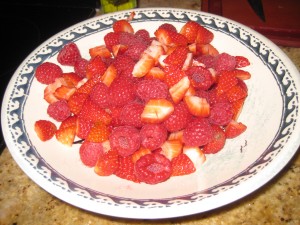 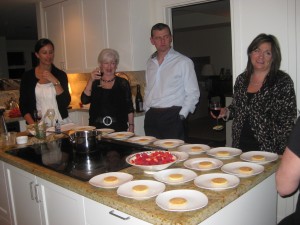 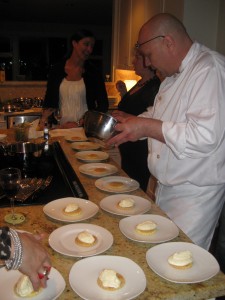 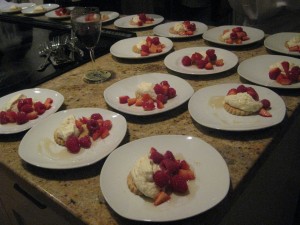 Desserts on the Plates 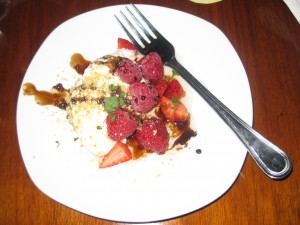 With everyone still digesting the main course, Chef Anatoli began to create his dessert, first the shortbread cookie was on the plate and topped with the whipped marscapone whipped cream, then topped with the sliced strawberries and raspberries, and drizzled with the the sauce. These plates were quickly passed around and soon everyone was back in the kitchen to enjoy this perfect ending to a great meal and a wonderful evening.

Tickets are $125 per person/per class and include a $50 tax receipt or purchase two classes for only $100 per person/per class (to be used by the same individual). For tickets and info, call 604-687-5315. A full list of chefs and dates is available at http://www.artsclub.com/events/cooking-classes/index.htm

Stay tuned to part 2 of the Cooking Class Series in Vancouver.