For my Fifty Second brunch in this series, I was joined by Actor, Writer & Improvisor Alan Marriott at Corduroy Restaurant in Kitsilano talking about Acting, Theatrical Writing, Improv, Voice-Overs and more. 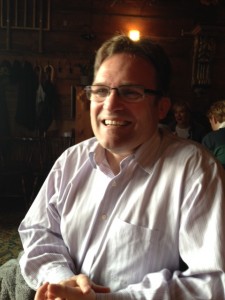 Having misspent his early years endlessly watching the Looney Tunes, Alan Marriott has been doing funny voices for as long as he can remember.  To actually start voicing cartoons himself was the fulfilment of a life’s dream for Alan, and his voice can be frequently heard popping up in animation throughout the English speaking world including, Bob the Builder, Bounty Hamster, Animal Stories, Vampires, Pirates and Aliens, Anthony Ant, and two cartoon feature films, Back To Gaya and Globi.

A Pen High graduate, Alan moved to Vancouver in 1980 to attend the Studio 58 acting school.  Alan left Studio 58 to join the first season of Salmon Arm Summer Stock Youth Theatre (SASSY) and did two seasons with the company where he played such varied roles as Jack Worthing in ‘The Importance of being Earnest’, Linus in ‘Snoopy’, and Van Helsing in ‘Dracula’.

Alan got his first taste of improvisation with Vancouver Theatresports and, as they say, things were never the same again.  After four amazing years with V.S.L., where Alan worked closely with (among others) Colin Mochrie and Ryan Styles, and also played the character of Aldous Bacon in VSL’s original production of ‘Suspect’ (an improvised murder mystery), Alan moved to London, England to complete his formal acting training at The London Academy of Music and Dramatic Art (LAMDA).  Upon finishing LAMDA the impro bug bit again and Alan set to work in London starting London Theatresports and creating and playing in numerous different impro formats including ‘Hamlet Improvised’, Impro Lear, Impro Lab (London’s first 2 act improvised play), The Impro Musical, ‘Lust Boulavarde’ (a improvised soap opera), and ‘Impropera’ (a 2 act improvised opera).

I knew I wanted to be an actor since I was 8 years old. I did community theatre and school plays while growing up. Always had a dream to go to London, which I did years later, enrolling in the London of Academy of Music & Dramatic Art. Ended up staying in London for 20 years working in Theatre, Improv and Cartoons (I did 8 characters on Bob the Builder). In 2008 I moved to Vancouver.

How did you get into Writing?

From the Improv that I did, I was doing writing. I wrote for a couple of animation series in the UK, I also had written some comedy, then created an improvised musical in the UK. I got to understand how the story structure worked, and it all evolved with the tools I had. I prefer collaborating and I wrote a musical called – The Adventures of Wonder Boy (hero musical).

In 1981, I moved to Calgary and started selling suits. I then got a call from a theatre company in Salmon Arm and without question I went the theatre route and di the 1st season with the Salmon Arm Summer Stock Youth Theatre (SASSY).

The Improv musicals – Linus in ‘Snoopy’, and Van Helsing in ‘Dracula’.

What was your favourite role you ever played in a production?

The green role in the Complete Works of William Shakespeare Abridged – in London at The Criterion Theatre (on for 1.5 years).

How did your latest project Mrs. Claus’ Kitchen come about?

Bill, Kevin and I loved that kind of 1960s stop, motion, kind of stuff. Bill is serious about Christmas, owns a sleigh. The show came up because they were thinking of a bakery idea for a musical. Bill came up with this Mrs Clause logo and from there we created the story and developed it. Wrote the treatment, then expanded it into a book (1st draft of script), then Alan wrote the music and Bill wrote the lyrics (Kevin did the book with me and Bill). The whole project took about a year (6 drafts of the script), the songs came together quick. It is an old fashioned Christmas musical for all ages and it runs December 11-21, 2013 at the Presentation House Theatre in North Vancouver.

We were fortunate to have Jeff Hyslop as the Director for the production, he knows his musicals (he was on Broadway for years).

What are you exploring now?

Persian food on the North shore. 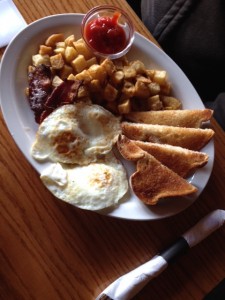 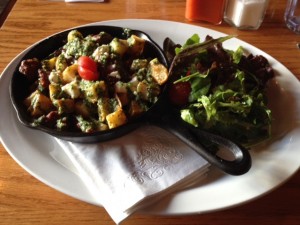 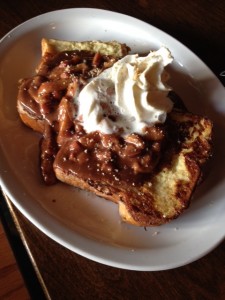 What is your favourite Christmas film?

What is your favourite Musical?

The Producers with Nathan Lane

Tell me about what the audience can expect to see at Mrs. Claus’ Kitchen?

A real family show that plays on the magic of a Charlie Brown Christmas, wonderful life, (Liz Bowen as Mrs Claus) is fabulous. Set in the early 60s when Christmas came of age. Its how we still want Christmas to be. We are lucky with our cast, Jeff casted the production.

You need to train, but its about where you train

2)      Teaching institutions like the Actors Foundry or others. Longer training process, voice training is super important. It is all about getting your chops together (talent is 5% or less, the rest is work – putting in the time.

Tell me about your Friday Night Live series you do

The series happens every Friday night in a church in Lynn Valley, it is a combined improve and guest performer show which is completely community funded by the Royal Bank and real estate agents. Organizations can also sponsor guests. The audience ranges from 60-120 from Friday to Friday.