Celebrate Theatre Under The Stars in style, our contest winner will receive 2 tickets to attend Theatre under the Stars performance of ‘Bye Bye Birdie” as well as dinner for two at Atithi Indian Cuisine to use on any night of your choice (subject to availability). Value $150 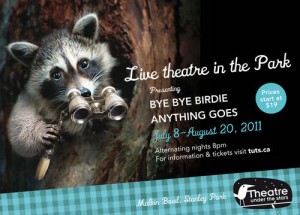 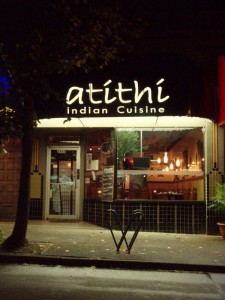 Rock and roll returns to Malkin Bowl as Bye Bye Birdie, written by Michael Stewart with music by Charles Strouse and Lyrics by Lee Adams, kicks off the 65th season.  Set in 1960 as teenagers all across North America are going crazy for rock star, Conrad Birdie. Yes just like kids today love Justin Beiber, the kids of Sweet Apple, Ohio are crazy for this (thinly-disguised) “Elvis Presley” teen heart-throb.  His manager, Albert Peterson has staked his financial future on Conrad’s success. Albert’s secretary, Rosie wants to marry Albert but is increasingly frustrated that Albert puts Birdie’s career before Rosie’s romantic plans. And just like Elvis Presley was in real life, Conrad Birdie has been drafted! Albert conceives an audacious plan. One lucky fan will kiss Conrad Birdie live on the Ed Sullivan Show before he leaves for the army. Kim MacAfee, is the lucky girl chosen to be kissed. But conflict arises when her boyfriend, Hugo Peabody, gets jealous and things begin to go horribly (and hilariously!) wrong.  When Albert ignores her advice Rosie becomes fed-up with Albert and especially fed-up with his domineering mother, Mae Peterson.  You know it will all come right in the end but not before some of the greatest music ever written for a Broadway musical comedy has been sung and the audience is left helpless with laughter! John Chapman of the New York Daily News called it “the funniest, most captivating, and most expert musical comedy one could hope to see.”

Cuisine: Passionate and homestyle food from the diverse regions of India, presenting our new Bengali dishes nightly. Located in Kitsilano at 2445 Burrard Street (at Broadway), reserve nightly at 604 731 0221.

1)    Leave a comment below on this post and Describe the perfect Summer Evening Picnic to enjoy at TUTS.

Contest ends Tuesday July 12. Contest is open to Canadian residents and the winner will be drawn at random. Good luck to everyone that enters!