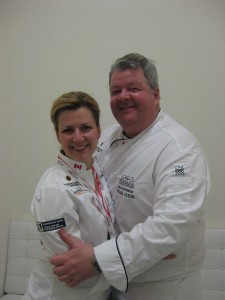 I had the pleasure of attending this culinary tasting that paired wines from Inniskillin with Chef Anna & Michael Olson’s creations on February 23rd, at the Ontario Pavilion during the Olympics. Celebrity chef Anna Olson, host of the Food Network television shows, ‘Sugar’ and ‘Fresh with Anna Olson’, seen in Canada as well as in 40 countries worldwide. Anna was joined by her husband, chef and culinary instructor Michael. 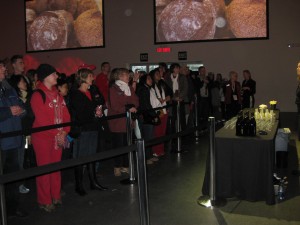 The overflowing crowd was truly overjoyed to watch and taste the wines and nibbles.

They served up three selections for everyone to taste paired with the wines. 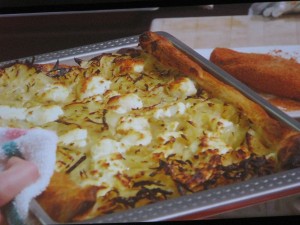 The first taster was the Caramelized Onion & Apple Tart with Fresh Goat Cheese paired with the Inniskillin Riesling.

The second taster was the Dry Glazed Pork Tenderloin with Tart Cherry Gastrique paired with the 2008 Pinot Noir Inniskillin.

The third taster was the Icewine Fruit & Cream Trifle paired with the 2008 Commemorative Inniskillin Ice Wine.