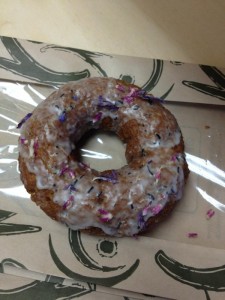 The other day I heard about a new donut shop that popped up at the corner of Carrall and Hastings. I was curious, and I had to check it out.  Within an hour of them opening just as I got in the door they were sold out. Curious then became furious, how could they sell out of 100 donuts so fast. Cartems Donuterie is owned by 3 partners,  Jordan Cash the guy who dreamt up the concept, along with his partners Mark Tagulao and Rajesh Narine, they opened up last week renting space in Sean Heather’s Penn Bake Shop for a 6 month pop-up donut shop. This is really a social media driven donut shop, even though they have specific hours listed on their facebook page, you have to follow them on twitter @Cartemsdonuts to be kept in the loop on if and when they are going to be open, the donut flavours on hand or that they are all gone. I see a trend @pizzeriafarina does this all so well, when they are running low on dough for the pizzas they tweet it out and within minutes they are sold out, they inform their customers on twitter, first pizza now donuts, what’s going to be next in this social media food game! 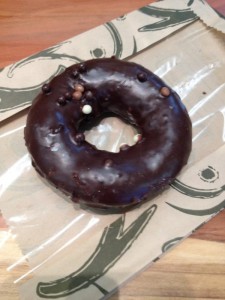 I tried the Earl Grey and the Triple Chocolate, I wanted to try the Maple Bourbon Bacon but there were none by the time I got there. They also make up to 40 different flavours for now including sweet snow, gluten free, cinnamon sugar, carrot cake, and sweet heat.

Their ingredients are sourced from as close to Vancouver as possible, the flour comes from Anita’s Organic Mill (Chilliwack), their eggs are from Rabbit River Farms (Richmond), butter comes from Golden Ears Farms (Maple Ridge), the milk is from Avalon Dairy (Burnaby), and their spices come from Gathering Place Trading Company on Cortes Island.

Local ingredients – ethically sourced and sustainable – mean a higher quality donut, could this be the driving force behind this already booming donut company.

Now this is where things get really interesting, how do you fry donuts in a pop-up shop that’s located in a bake shop without a fryer. Enter the Woodland Smokehouse & Commissary another newly opened business located at 485 Commercial Drive which is owned by Tyson Reimer and Ryan Murfitt of Gastown’s Peckinpah. Tyson and Ryan opened the Woodland Smokehouse as they ran out of space to expand their product offerings, they needed to expand their meat smoker. One thing lead to another a new commissary was born, the guys from Cartems needed a place to make and fry up their donuts and voila this is just the beginning!