Chicken and waffles is a soul food dish combining waffles, a breakfast food, with (usually) fried chicken. The dish is most commonly made by serving fried chicken with a waffle, the waffle then typically being covered with butter and/or syrup. This unusual combination of foods is beloved by many people who are influenced by traditions of soul food passed down from past generations of their families. Originating in the Southern region of the USA this comfort food dish has quickly made it on to restaurant menus in and around Vancouver.

In ranking order, these are are the Best Chicken & Waffles in Vancouver: 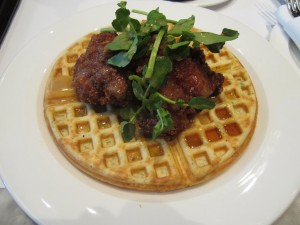 My take: The chicken was unbelievably good crispy on the outside and tender and juicy on the inside. The chicken was brined for 3 days and then marinated in buttermilk over night. Personally I prefer white meat over dark and this version of the dish won me over not only for the chicken but for the savoury waffle combination as well.

On the regular menu: Yes on the Weekend on the Brunch menu 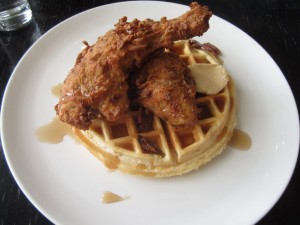 My take: Even though it was a leg and a thigh, the chicken tasted very good, crunchy on the outside and tender on the inside. The waffle was large and thick and the pecan vanilla butter with the maple syrup really made this dish.

On the regular menu: Yes on the Lunch and Brunch menu 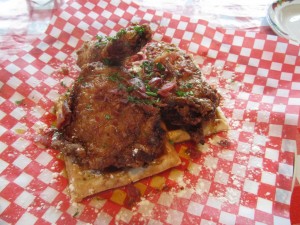 My Take: Large portion of chicken, crunchy battered and fried. It was the savoury waffle with corn, scallions and cayene with the bacon, bourbon maple syrup that made this dish.

On the regular menu: No – call a minimum of 2 days in advance to special order. 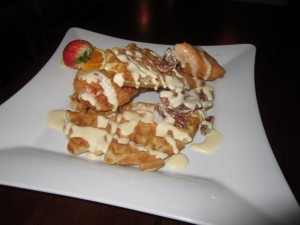 My Take: The chicken was good but could have used a bit more crunch, the waffles could have been larger, there was no maple flavour in the syrup, so I would have added maple syrup on the side with the dish.

On the regular menu: Yes on Brunch menu 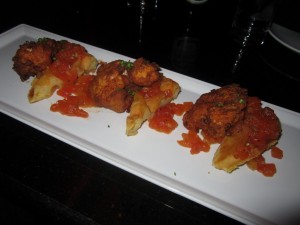 My Take: It was like a fusion version of Chicken and Waffles, I liked the cheddar waffle on its own but not with the watermelon relish. I also thought having maple syrup on the side would have been a good addition to the overall dish.

On the regular menu: Yes on the dinner menu

Apologies to other restaurants that I did not have a chance to visit for their Chicken and Waffles those are Phat Deli  and Rumpus Room!

Feel free to add your comment here with your favourite Chicken & Waffles in a Vancouver area restaurant and name the place and their location, the cost of each excluding tax and why you think they are the best!

EDIBLE CANADA AT THE MARKET