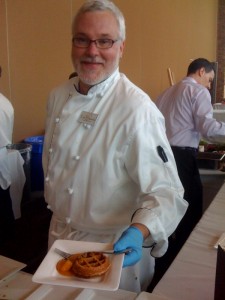 I attended this fabulous event on June 27th, Food Fight! The Battle for Brunch that benefited Variety – The Children’s charity.  The event brought together some of BC’s finest chefs in a battle for best brunch. Guests sampled each delicious offering and cast their ballot to declare one chef the Food Fightchamp! Close to 300 foodies and their friends enjoyed a gorgeous harbor front view at the Vancouver Convention Centre as well as an auction which featured some incredible items courtesy of the participating restaurants and other local favourites. 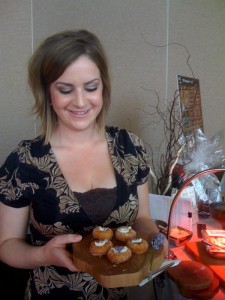 Event contenders were the Executive Chefs from LIFT Bar & Grill, MARKET at Shangri-La, O’Doul’s Restaurant and Bar, River Rock Casino Resort, Tigh-Na-Mara Seaside Resort and YEW Restaurant at the Four Seasons Hotel. After the ballots were cast Chef Eric Edwards of Tigh-Na-Mara Seaside Resort in Parksville, with his delicious Warm Nanoose Edibles’ Spinach Salad and Sweet Potato Waffle with Pecan Compote was declared the Food Fight champ! Runner up was Oliver Beckert of YEW Restaurant at the Four Seasons Hotel Vancouver who made an incredible Crab and Poached Egg Sandwich and Donuts with Small Quenelle of Chocolate Mascarpone. 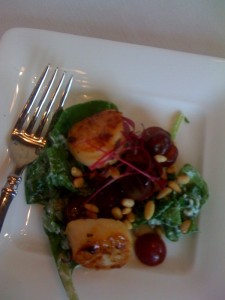 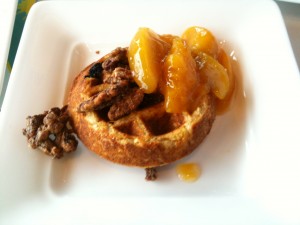 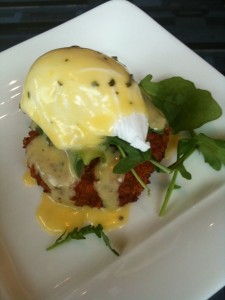 My favourite dishes were the same dishes served by both Tigh-Na-Mara and YEW! The event was emceed by Vancouver personality, Fred Lee, who did a fantastic job entertaining the crowd as well as served as auctioneer. The event raised over $38,000, with almost $12,000 brought in through the live and silent auction alone. All funds will be used by Variety to support children in British Columbia who have special needs.