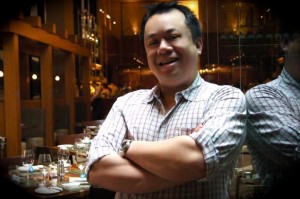 David Lew has been voted and recognized as Vancouver’s BEST WAITER for 2012 by you our readers. Here is my Interview with David Lew who is a server at Yew Restaurant in the Four Seasons Hotel Vancouver.

What do you love about being a waiter?

The experiences are different day in and day out.  Working in a restaurant that’s within a hotel, you meet all kinds of people from around the world.  One day you’re serving the most down to earth family and the next your serving a group of business men who speak minimal English.  I had to do a ‘Show & Tell’ by bringing out different products on a plate to show them what we have available because it was the easiest way to communicate.

Most importantly, the food and wine I get to sample keeps me enthused. I love menu tastings!!

How long have you been working at YEW Restaurant?

I was part of the opening team 5 1/2 years ago but I’ve been with the Four Seasons Hotel for 17 years.

Why do you think people voted for you in the Vancouver Foodster Awards?

It’s a great honour to be recognized.  I guess I left an impression or two on the people who i’ve served.  I’ve always wanted my guests to leave with smiles on their faces and that they’d return in the future.  Having them to vote for me was a bonus!

What’s the secret to good service?

Secondly, you also have to adapt yourself to the situation at hand.  Nowadays, people are always in a hurry and you have to adjust your service accordingly. Try and anticipate their needs before they even ask. On a busy Friday evening, I may have a few tables who want a dining experience and a few that want to eat and run.  It really is a juggling act.

Another, is that no matter what situation I’m dealt, I try to make a connection with the people I serve and for some, they keep returning.  I guess I must be doing something right.

Lastly, Yew management encourages us to think creatively and empower us to do what is necessary to give our guests a ‘WOW’ experience.  They trust our judgement and its this freedom that allows us to better serve our guests without having to check with a manager first.

Noodles!! Especially, Vietnamese Pho and Japanese Ramen.  I’d eat noodles 4-5 days a week. Too bad I missed out on your #noodlemaniayvr.  I would have been in noodle heaven!!

How can a restaurant attract the best waiters who excel in service?

I’m a firm believer of promoting within and training the staff you already have. I’d take a busser or food runner and groom them to be a server over hiring an experienced one any day.  I started at the hotel as a busser and worked my way up the ladder. You develop more of an appreciation for the position because you worked so hard to earn it.  The benefits are also key for me staying as long as I have.  I can’t reveal them, but I can tell you that I’m pretty sure nobody in the city can top the perks the Four Seasons has to offer.  It really goes to show why the Four Seasons Hotel consistently makes the list of Top 100 Employers to work for.

I’ve been in the industry since I was 6 years old.  My parents owned a Chinese Restaurant for years.  It has always been in the blood.  After high school,  I attended VCC and completed both the Food & Beverage Management Program, as well as, the Hospitality Management Program.  After which I was hired by the Four Seasons Hotel.  They have a remarkable training program at the hotel.  There are a series of sessions were we learn Service Culture and Standards.  In Yew, we have weekly wine tastings with discussions and also menu tastings. We never stop learning.

What interests do you have outside of the restaurant business?

Other than eating and trying new restaurants.  I’ve been running alot lately. I just completed my first half marathon last September.  My wife and I have a race coming up in February.  I plan to do 3-4 more races this year and hopefully attempt my first full marathon before the year is over.

Request to be seated in David’s section at Yew Restaurant  in the Four Seasons Hotel, Vancouver