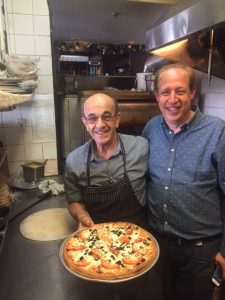 For someone who works their craft day in and day out for 49+ years, there is bound to be some exciting stories to share. I was honoured and excited to watch George take me through the steps as he makes the pizza dough, and his Greek style pizzas, step by step and then tops the pizza with all the necessary ingredients. 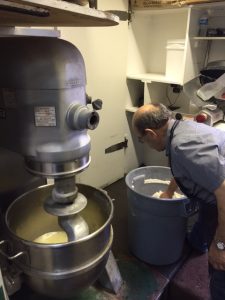 I asked him what drives him to keep on working his craft at Olympia Pizza, making the dough, making the pizzas at his Kitsilano restaurant; he said, what else would I do to keep busy, what would I do if I stayed home. He immigrated to Canada with his 5 brothers in the 1960’s, each brother opened their own business and most were hospitality oriented in one way or another. One of his brothers and him started Olympia Pizza which used to be located just East of Macdonald on Broadway, about 22 years ago they moved West and have been at 3205 West Broadway ever since. These days even his kids work in the restaurant from time to time to help out, this is a family who loves to serve their loyal customers.

I asked George what the secret is to making pizza dough, he said, You need to have a good mixer, he has had his Hobart for over 20 years, the older machines last so much longer than the new ones. The weather in Vancouver is a factor, humidity, rain, warm days all come into play when making the dough. Sometimes we need to add a little water or oil and other times we don’t. When it is warmer he puts less yeast, when it is colder it takes it longer to make the dough. 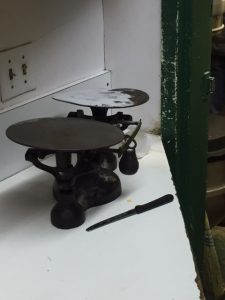 He uses the same scale that he used when they started the restaurant, it works so why change it, he says. 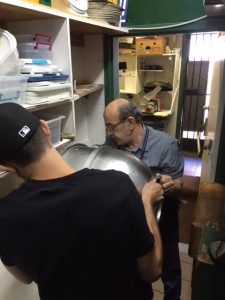 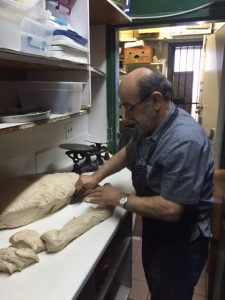 George told me that over the years he has crafted the perfect dough which is made with a blend of whole wheat and white flour. Two gallons of dough makes approximately 70 pizzas. 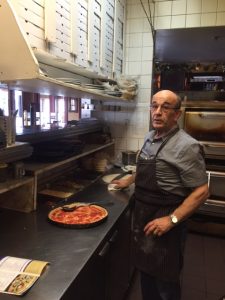 He uses the same tomato sauce recipe that he used when the restaurant opened.

I asked him if he learned how to make pizzas back home in Greece, he said he learned after arriving in Vancouver when they decided to open a pizzeria focussed restaurant, they had to learn how to make their pizzas from scratch, he pretty much hasn’t changed a thing since starting out. 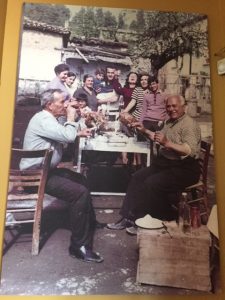 A photo hangs on the wall in the restaurant, I asked George, when the photo was taken and he is said 1972 and I asked who is this in the photo, that is my mother, that is my father, that is me, and it was taken when I returned home to Greece for a visit about 5 years after settling in Canada. 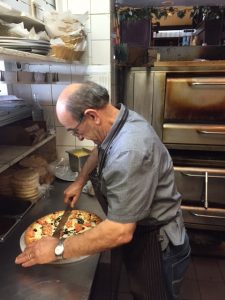 I asked him how he keeps the pizza’s consistent over the years, he said you have to have the passion and patience.

Our hours used to be open until 4 am, people came after the clubs, these days we are closed by 11pm, it is a different time now than it was years ago. His son Niko helps out working in the restaurant a couple nights a week 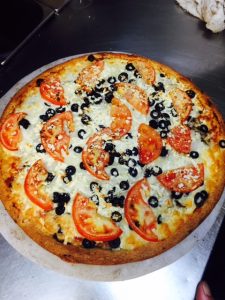 The pizzas take about 10 minutes to bake in the oven when it isn’t busy and longer when it is. He made me the Vegetarian special without the obligatory green peppers and added feta.

I sat in the restaurant enjoying a couple slices of the delicious pizza while listening to many stories George shared. You can find Olympia Pizza in Kitsilano at 3205 West Broadway and you can find them on Instagram here.