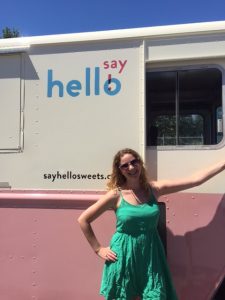 With a passion to open her own ice cream truck Naomi Arnaut did just that.

An ice cream truck with a mobile license, her colourful truck will be roaming all over the city from busy streets outside of the downtown core to festivals in the city and beyond.

After testing out recipe after recipe on a small ice cream machine at home, she went to Ice Cream university in Penn State to learn all she could about making her own ice cream, and Say Hello Sweets specializes in making the most delicious dairy free goodness around. 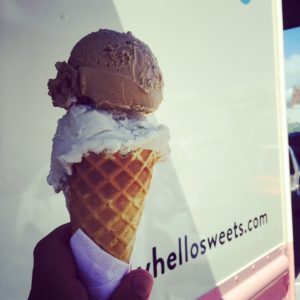 Toasted Marshmallow on the bottom; Cafe No-Lait on the top of a waffle cone

Ice cream tasting, I tasted through all 4 flavours which were on the truck when I visited. My favorites were the Toasted Marshmallow, and the Cafe No-Lait, followed by the Monkey’s Uncle with caramelized banana & toasted walnut pieces.

You can get these wonderful flavours on the cone, or in the cup, or pick up once of the ice cream sandwiches or floats. 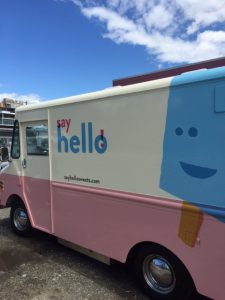