Last night I took the opportunity of a rare free Monday night to visit 33 Acres Brewing to experience one of their Monday pop-up dinners in what’s known as the Monday Night Dinner Series. A guest chef was filling in for regular Chef Juno kim who was out of town, this guest chef was Abdallah El Chami, who offered up a Lebanese experience of delicious eats. 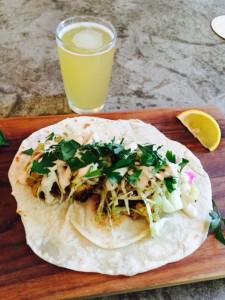 I had the vegetarian offering which was Fried Cauliflower Taco with fried potatoes, pickled turnip slaw, lemon, tahini on a homemade flour tortilla paired with the.33 Acres of Sunshine. 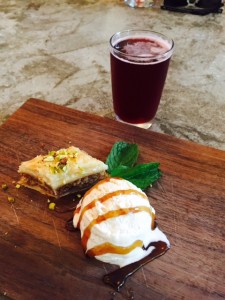 I then had the Walnut x pistachio Baklava, vanilla ice cream, Turkish coffee syrup; paired with 33 Acres of Twee.

The chef of the night puts out a menu of a meat, a vegi and a dessert, promoted on Instagram and twitter a day or so in advance. Each dish is paired with a suggested beer from the 33 Acres line-up and it’s all reasonably priced.

This brewery is one of the first in the latest wave of craft brewers to open in the city, and the team gets it, rather than offering the same type of food that almost every other craft beer tasting room does in the city, they went a different route. Typically Monday nights would be quiet in most brewery tasting rooms, but not here, at this one, these pop-up dinners are quite the draw and the place was pretty much packed from 5pm onwards and it’s apparently like this every Monday night.

I would love to see a reprise by Abdallah El Chami, here is hoping that some of the other craft breweries will embrace this pop-up idea and feature chefs and their exciting menus in their breweries.