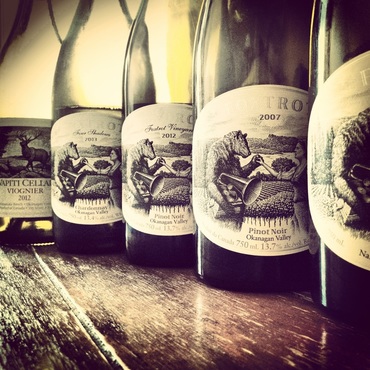 On Thursday, August 20th 2015 Bauhaus Restaurant will partner up with Naramata’s cult favourite Foxtrot Vineyards for a very special 7-course Foxtrot dinner showcasing wines from Foxtrot and its offshoot, Wapiti Cellars. Winemaker Gustav Allander will be in attendance to speak about his award-winning wines, which will be paired with Baltic-inspired dishes created by Chef Stefan Hartmann as a tribute to the Allander family’s Swedish roots, and influenced by Hartmann’s own personal experience growing up in Northern Germany.

For this Foxtrot dinner, guests will get to sip on Wapiti Cellars’ 2012 Viognier and 2013 Pinot Noir rosé, as well as Foxtrot’s ‘Four Shadows’ fantastic 2013 Chardonnay, the newly-released 2012 Pinot Noir and the award-winning 2007 Pinot Noir, recipient of the 2010 Lieutenant Governor’s Award for Excellence. Expect their bar team to be mixing Swedish-inspired cocktails throughout the night.

Since their first 2004 vintage, Foxtrot has been highly regarded as one of the top producers of Burgundian-style wines in Canada. The Allanders’ uncompromising approach to quality, from low crops to careful winemaking, has paid off with world-class wines that keep on collecting numerous accolades from critics around the country. Celebrated wine-critic and author John Schreiner has described their flagship Pinot Noir “at once powerful and elegant,” “a wine to elope with.” In 2010, Gustav Allander and his wife, Nadine, launched Wapiti Cellars as a side project to showcase different varietals and techniques.