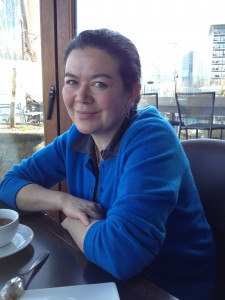 For my fortieth brunch in this series, I was joined by CBC Radio Reporter of The Early Edition and Host of CBC Radio HotAir Margaret Gallagher at Lift Bar & Grill in Coal Harbour talking about Radio, Cooking, Bicycling and more.

Margaret Gallagher has been hosting and reporting for on the radio for the past 12 years, having been a regular part of CBC Radio One’s The Early Edition since 2001, and was the BC host of CBC Radio 2’s Canada Live.

Prior to joining the CBC, Margaret was active on the arts scene and worked with the Western Front, the Video In and the Independent Film and Video Alliance. She has worked as an editor, a freelance writer, and technical communicator. Her previous work earned her an award of distinction from the International Society of Technical Communicators.

Margaret has won several awards including two prestigious National RTNDA (Radio-Television News Directors Association of Canada Awards) Dave Rogers Award for Best Radio Feature for her piece “Fade to Black”, about the closing of the last drive-in in the Lower Mainland and one for “Gail the Golden Age Goalie” where we met a 77 year old goaltender who shows no signs of slowing down.

I was a technical writer and teacher at SFU and I wrote for Rice Paper Magazine as well. I worked at Creo and Vertigo beforehand, one opportunity lead to another (my degree was Sociology and Anthropology from SFU, worked in the arts world) then radio. Always a writer …..

How did you get a job with the CBC?

The Editor of Rice Paper Magazine was also an Associate Producer at CBC and he asked me to apply for a job. The 1st piece I did was about a Volvo (my very first car) and the show happened to be in Surrey. Funny piece on the car show and after the piece I got a 1 year contract to start.

When did you join The Early Edition on CBC Radio? And has your role changed over the years since you started?

11-1/2 years ago was my 1st job and I have been hosting HotAir for the past 3 years. My job is still the same to report on community, Arts & Cultural, bring the city into the studio. It has changed because the city has changed with it. There was no social media back then, Hosted Canada Live for 2-1/2 years (60 concerts in one year).

How did you become the host for CBC Radio One’s Hot Air?

Paul was retiring, I always loved music and singing and I had done Canada Live previously. I had a love for music and was lucky enough to be the person to get that job.

What is your favourite Chocolate?

Tell me about your Cheesecake Experience

Years ago, I worked at Cheesecake Etc for 8 years, within that time frame I spent 4 years baking the cheesecakes and made over 60,000 pieces of cheesecake. 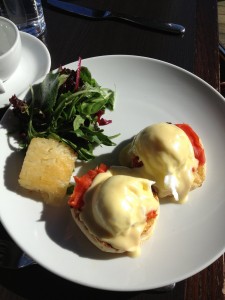 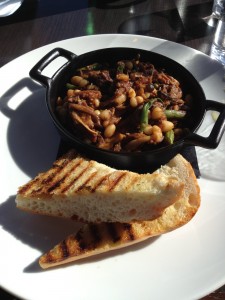 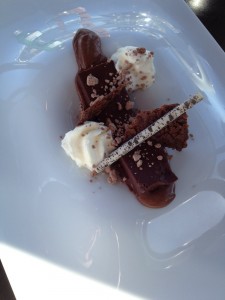 Margaret had the Smoked Salmon Eggs Benedict with two poached free run eggs on toasted English muffins, hollandaise sauce and hashbrowns and Richard had the Bison Short Ribs Cassoulet and then Margaret and Richard shared the Almond Chocolate Bar for dessert.

What do you want your listeners to learn if you will from your Hot Air show?

To learn about some of the great Jazz in our city and country. Also, celebrating the music and exposure of our talented BC musicians.

HotAir – couple of weeks ahead

Early Edition – sometimes the day of and others a week or so in advance.

My mom was an accomplished musician, so I listened to Classical at home and fell in love with Jazz in my late teens (my brothers and I got into Alternative and New Wave in our teens).

Tell me about your catering company, Komodo House that you once had?

Before working at CBC – my friend (Angela Wan) and I was cooking a lot and did some Indonesian dishes. Then did catering for cultural events – SE Asian inspired food. We are still obsessed about cooking.

No – but my father is a retired English professor and actor. My mom is a teacher and piano player. My brother is an actor

People who I interviewed regularly who are inspiring. My daughter is 3-1/2 years old who is inspired by everything. People who are passionate and show kindness. The people I work with who are curious and passionate people inside and outside the office.

What is one of your traditions in your family?

At least once a week we make this dish with Fried Chick Peas, Dried Chorizo, and Fresh Spinach