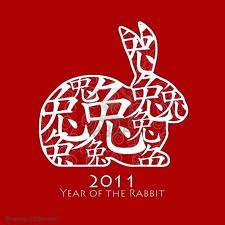 One ancient Chinese axiom states that if a thing is worth doing, it is worth doing at least twice. Consider New Yea’s for instance. There’s the mainstream New Year’s Eve held on December 31st – a rather sedate affair by Chinese standards (elegant champagne, a few little noisemakers, steamers and silly hats). Since the idea of celebrating New Year is essentially a good one, why not do it again? This time hold a party that lasts 15 days and includes parades, dragon and lion dances, tons of noisy firecrackers and food, lots and lots of special food. Now, that’s a celebration worthy of welcoming a new year!

Hippety hoppety into the Chinese Year of the Rabbit (4709 if yo’re counting) with a special prix fixe menu at Wild Rice. Proprietor Andrew Wong and Executive Chef Todd Bright have created a four-course dinner for the auspicious price of $38.88 (numeral three meaning ever-growing and numeral eight meaning good luck) which will be available from February 2 to 13, 2011. Do’t worry, as much as many people enjoy the taste of rabbit, you wont find Thumper on this menu. Instead, Wild Rice will donate 10 percent of the menu’s proceeds to support the Rabbit Rescue Shelter.

What you will find are four courses designed to seduce your taste buds while giving you wishes for a happy and prosperous year. As in traditional Chinese banquets, each of the courses includes ingredients with symbolic meanings. Get things off to a festive start with a Pink Bunny. Better known as a Kir Royale (sparkling wine and framboise), the Pink Bunny sends wishes for good luck through its pinky red hue (red being the colour of good luck in Chinese symbolism).

Ha Gow little purse-shaped translucent pockets containing BC Spot Prawns, are the first course. Familiar as a dim sum dish, these generously sized dumplings, express wishes for good luck and increasing wealth with the Spot Prawn representing the dragon (good luck) or yang male principle while the shape of the dumplings connotes a money purse.

Next course is Pheasant and Squab San Choy Bow – Chef Bright’s modern take on a very old dish, the lettuce wrap. This one consists of local pheasant and squab minced with tasty mixture of water chestnuts, green onions, shitake mushrooms, carrots, celery and onion flavoured with oyster sauce, sambal, rice wine and honey. The overall symbolism is of wealth and good fortune. The lettuce connotes new growth and beginnings. The rich dark meat of the pheasant and squab represent flying up or rising (as it is air meat) as well as the female yin principle (because it is dark) to balance the yang of the previous course.

Instead of serving the traditional Peking Duck, Chef Bright’s Duck breast accompanied by crispy Yukon Gold potato and duck leg confit cake served with steamed greens in a pinot noir jus brings many good wishes. The succulent, dark meat of the duck connoting richness while the Yukon Gold potato, by its very name, implies wealth. The cake shape is also a nod to gold coins with the greens representing new growth and the pinot noir jus implying more good luck through its redness.

All Chinese banquets end on a sweet note to wish participants sweetness in the coming year. In this instance, Andrew Wong and Chef Bright chose to present a version another dim sum dish  Lotus Wrap Eight-jewel Rice. In this instance, the Lotus Wrap encases a steamed glutinous rice and sweet red bean paste cake studded with cashews, sultanas, dried apricot. The rice is a symbol of abundance as well as fertility. Red beans are particularly lucky in Chinese culture signifying both good luck (red colour) and abundance. The nuts (like seeds) send the wish that you are surrounded by a large family with many children while the dried fruits bring sweet wishes. The rice cake is drizzled with a mandarin syrup (mandarins mean riches) which also add to the sweet wishes for an abundant life.

People born in the Year of the Rabbit are said to be the luckiest of all the zodiac signs, frequently artistic with many friends. They are admired for their good taste.

Demonstrate your good taste by hopping over to Wild Rice to celebrate the Year of the Rabbit in grand Chinese style. Youll thank your lucky stars you did. Reservations are a good idea at www.wildricevancouver.com or 604-642-2882.

Tales of the Cocktail on Tour Vancouver March 13-15