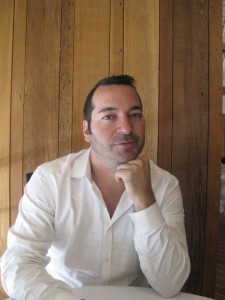 I sat down with Harry recently for a chat. Harry opened his first restaurant in 1992 and has been a leader on the local restaurant scene ever since. First it was the Raincity Grill in 1992, then C Restaurant in 1997, then NU in 2005.

There’s a balance between running a profitable business, and providing the above-and-beyond experience I passionately wish to deliver. And in this new economy, that balance teeters a lot more. With three properties, I do feel like a juggler from time to time, and that gets a bit difficult because there are always things rushing through my mind, creative, revolutionary things I’d like to experiment with.

I find that a kitchen is almost like an infantry: their camaraderie is palpable. And when that phenomena is present, the kitchen runs smoothly. So I always let my chefs choose cooks who they feel they want to work with. They don’t always have to be the most experienced or the most talented, they just have to have that team / unit mentality and have a hunger to learn and be useful. I choose the chefs, of course, but I don’t choose the cooks. I think it’s important to allow the chefs to form their own teams. It gives them ownership of their group and really, they’re the ones who are in the “trenches” all day, so they need to surround themselves with the people they mesh with.

When you opened C Restaurant in 1997, what was your vision in regards to sustainability and the seafood you were going to serve?

I really became passionate and focused on sustainability in 1999, when the turn of the century was happening and it really made me, and I think people in general, ponder the future a bit more. In 1997, I was more concerned with the fact that Vancouver, a seaport, had no great, fine-dining seafood restaurants and that we were exporting most of our local seafoods to the East. It’s almost typically Canadian that we don’t appreciate what’s close to home, and glamourize things that are foreign or from far away. So with Chef Soren Fakstorp (Robert Clark was a sous chef at the time) we set about to build a high-end fish restaurant that used local stocks that were prepared and presented in modern ways. We weren’t interested in doing the boring bouillabaisses and the overdone surf-and-turfs. We were enthused about doing contemporary reinterpretations of those dishes, and pushing-the-envelope creations, that we felt Vancouver was finally ready for.

I understand that C Restaurant was one of the founders of Oceanwise before it became Oceanwise through the Vancouver Aquarium. Can you reflect on the successes since it all began?

Well, we’ve always seen the benefits and possibilities of partnering with organizations, whether they be small or large, and getting in on the entry level of something worthwhile is rather sexy to me. I like being the first. I like trying things that are new. And I wanted to be apart of that genesis the Aquarium was conjuring. It felt exciting to me, and it felt necessary. It’s been very satisfying to watch it grow, and see other restaurants adopt the Oceanwise formula and logo. Really, if we don’t make concentrated conservation efforts, I really don’t think there will be any food for my grandchildren to eat.

Vancouver has a lot of great Asian restaurants with those fun and imaginative smaller plates. I usually like to order a lot of those with some sake. I don’t really go to other fine-dining restaurants.

It sounds like such a cliché, and after saying that it’s Canadian to glamourize other places, I’m reticent to say it… but it’s New York. I just really love the amount of thought and care and imagination the New York restaurants put into what they do. And they have the budgets to do things with interior design and general execution that we don’t have here. But the thing about New York, and I think even Toronto… there are a lot of amazing, brilliant chefs there – but I think the ingredients you find in B.C. are better. And I think that’s what gives Vancouver the advantage, I really do.

Well, I think it’s general knowledge that it is a very risky endeavour. Most restaurants don’t work, they don’t survive… and in this economic climate it’s obviously worse. But, it’s like what I talked about before, about hunger. Without hunger, you don’t have a chance. So I would suggest that if you don’t have it – if it’s not what you really want, what you crave, then don’t go for it. But if you have that feeling in your stomach, and you can pre-visualize every detail, then go. Just don’t look back.

I think every restaurant in Vancouver is still feeling a little shell-shocked from the Recession. Sure, the Olympics were a big boon – but the Recession set us all back a couple years, I think. I think we’re going to play it safe for a little while. That certainly doesn’t mean that things are going to be boring, or that we won’t try anything new or look in new directions, but Vancouverites seem unsure about what they want in this new economy, and Vancouver restaurants don’t seem sure if they should make the first move. At C, we have been developing our catering wing for the last while, and that has been very successful for us. I wrote a cookbook, in tandem with Chef Clark, that has received some accolades, and it was nice to create something that isn’t devoured in an evening, like a meal or an experience, but that will exist in perpetuity. I am interested in making a documentary film about sustainability or the like, and I also have my enewsletter, Ethicalluxury.ca, which I find very exciting and is garnering a loyal following.

Chefs for Life 2010 at Goldfish