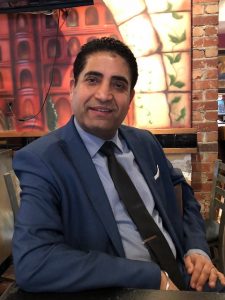 I sat down with Kamal recently in his India Bistro Restaurant in the Westend and talked about his restaurants and his love for people and socializing.

Kamal arrived in Vancouver from his native Punjab in the early 80’s and plunged himself into the restaurant business as a bus boy and dishwasher while going to school to become a chef. In the Lower Mainland, Mroke had Handi in West Vancouver, Dawat in East Vancouver, Copper Chimney in Downtown Vancouver before opening India Bistro and Swad Indian Kitchen, both of which he operates currently.

As a kid growing up, what did you want to be?

I didn’t want to be in the restaurant business. I had no idea what I wanted to be, my first job while I was in high school was a pizza cook in a restaurant where I worked late nights making pizzas as well as another job where I was a dishwasher and got paid $10 an hour, I got free food while working these jobs and I was so happy. After I graduated, I heard that PVI – Pacific Vocational Institution (a division of BCIT) had a cooking program that was one-year course to become a chef, I went to school there and when I graduated worked at the Granada Motor Inn in Richmond on the night shift as a Sous Chef.

While I was working there, PVI had then launched a new course in Kitchen Management, my Executive Chef boss at the motor inn wrote me a reference letter for me to get in and take the 3 month course, I got in, and then I ran around working to get experience. I had 2 jobs working in the day and at night. In 1985, I wanted to start to learn to cook Indian food, and in 1986 during expo time there was a new French restaurant on Robson “Adul” , I worked as part of the opening team; while at the same time working at an Indian restaurant at night. Shortly thereafter, through a connection that I had I ended up opening up my own coffee shop in North Vancouver; I had a business partner who skipped town and that restaurant closed. Through another opportunity I went to Calgary and opened a restaurant in a partnership and did that for a year.

In 1989 I moved back to Vancouver, bought the restaurant called Da Tandoor, my brother needed a job, and I told him to come and work for me. My chef that was working for me had a connection in Seattle and there was another opportunity to open there. I gave the Vancouver restaurant to my brother to run and I moved to Seattle, it was very successful, I gave it to my other brother to run and I opened another restaurant in Bellevue. At the time there were no other Indian restaurants in that area, my customers included Bill Gates who always came for dinner and Paul Allen who only came for lunch, they both frequented my restaurant. They then started having me cater their events, and my business grew quickly. A fire broke out in the back of my building and by the time we saw it and called for the fire dept, my restaurant pretty much burned to the ground, I realized then it was time to move on; and I returned to Vancouver.

Why aren’t you offering a lunch buffet in your India Bistro restaurant?

With the ongoing staff shortage, in order to run the buffet we used to have chefs come and start early in the morning, the ongoing costs as well as not being able to find staff meant that we had to end our buffet a few months ago after featuring it for over 11 years.

What drives you to succeed with your different restaurants?

We have a different clientele at our West Vancouver restaurant and our downtown Restaurant; I work hard so that my customers can enjoy our food in each restaurant.

What do you like to do in your off time outside of business?

I have no time to do anything other than work in my restaurants, I check my phone every morning to see who isn’t going to come in to work today, I am in my restaurants everyday of the week.

What do you want to do when you retire?

What is your favourite dish in one of your own restaurants? And in which restaurant?

I love everything, I try different food and cuisine all the time.

If you weren’t in the restaurant industry, what industry would you be in?

I love to entertain people.

You have to move with the market.