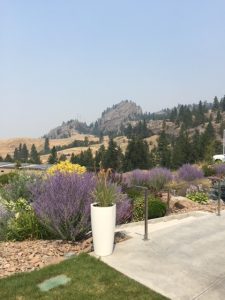 I spent a day in the Okanagan mid-Summer, what was supposed to be a beautiful summery day by the lake turned into a smokey day due to the wild fires burning in the area. With smokey skies and all, I had a wonderful visit to John Skinner’s beautiful Painted Rock Winery in Penticton. 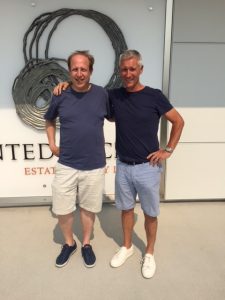 I had a chance to visit my friend John Skinner, taste some wine and tour his beautiful property. His vineyard is situated on a beautiful property where they are currently producing 7,000 cases of wine per year which is sold in Canada to their wine club members, in restaurants and stores, as well as exported to China, the UK and areas beyond. 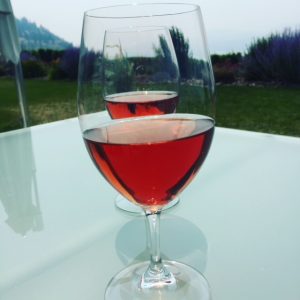 I enjoyed the Painted Rock Rose 2016 on their outdoor patio which overlooked Okanagan lake. 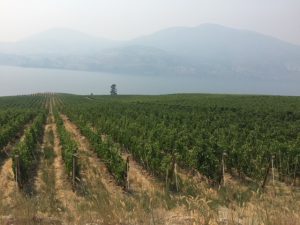 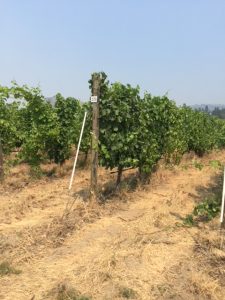 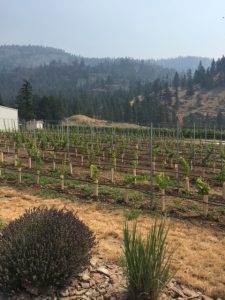 Their winemaking team is headed by proprietor John Skinner in close collaboration with Bordeaux-based consultant Alain Sutre, who defines winemaking protocol, advises on viticulture, integrates vineyard and winery, blends, and teaches. Their Assistant Winemaker Gabe Reis, is on site full-time to implement Alain’s instructions and benefit from his tutelage. Teamwork and a shared passion for quality support Painted Rock in its vision to produce exceptional wines. The Okanagan Valley has been producing increasingly good wines, and the opportunity to produce great wines has arrived. Painted Rock is extremely optimistic about the potential of the Okanagan as a region, and are particularly optimistic about their role in this exciting winemaking community. John and Trish Skinner are not only making wines for their family and friends to enjoy now—they are intent on making iconic wines that will be savoured by generations to come. 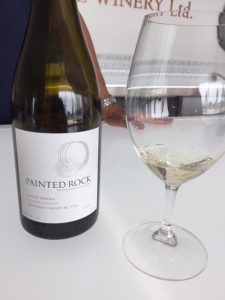 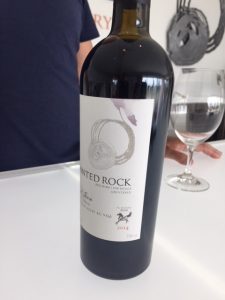 One of my favourite Syrah wines from the Okanagan region is Painted Rock and I had a chance to taste this as well as some of their other wines and their beautiful tasting bar in the tasting room.

Painted Rock Estate Winery is located at 400 Smythe Drive in Penticton, BC, Canada, contact them if you are going to be in the area to arrange a visit to their tasting room at (250) 493 6809. 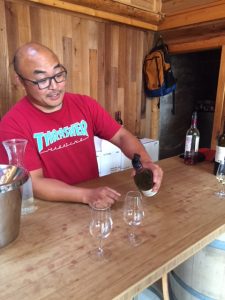 Another winery I visited that afternoon was Kanazawa Wines which is on the way towards the Naramata, located in Northern Penticton. I had the pleasure to meet Richard Kanazawa a few months prior at an incredible dinner hosted by Chef Vikram Vij at his My Shanti Restaurant in a collaboration dinner with Chef Stephan Hartmann of Bauhaus Restaurant.

Richard’s path to his winemaking career began as a delivery man for Domaine de Chaberton Winery in Langley, BC. During his time driving the “Vin Voyager” he would daydream about playing Rugby and one day becoming a winemaker. He applied to several wineries in Australia and after one phone interview he was on a plane. In Australia, Richard was able to further his education, gain experience tasting with accomplished winemakers and still play rugby. His passion for winemaking grew and he couldn’t wait to get home and prove himself as a head winemaker in the Okanagan Valley.

After making award winning wines for seven years in the Okanagan valley, his wife, Jennifer and Richard decided it was time for them to produce wines under their own label. The first vintage of Kanazawa Wines was produced in 2010, in which they only made red wine and sparkling wine. The following year, they produced their white blend and late harvest dessert wine. Total production for their inaugural release is 900 cases. 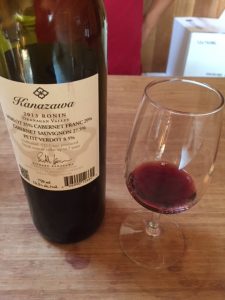 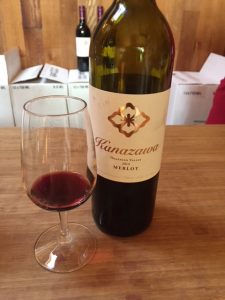 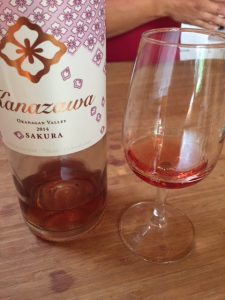 I had a chance to taste each of his wines in his portfolio at this tasting bar in the tasting room, both the Merlot and Sakura are beautiful wines, look for them on wine lists at fine restaurants throughout Vancouver and areas beyond.

Kanazawa Wines is located at 1465 McMillan Avenue in Penticton, BC, Canada. If you are planning to be in the area you can call him at 250.486.7424 to arrange a tasting visit.

Feast of Fields at Krause