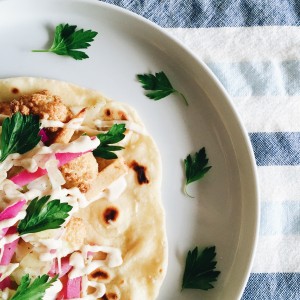 Processed with VSCOcam with a6 preset

A while ago I had indulged in the Dallah Menu offering one night at 33 Acres, I’m excited that Chef Abdallah El Chami took my nod and suggestion to put on another pop-up dinner of sorts.

On January 30th, 2016 he will transform The Birds & The Beets Café in Gastown into a Lebanese cantina for one night. Abdallah El Chami (or “Dallah”) will be taking over the kitchen at The Birds and The Beets in Gastown and serving Lebanese tacos. This will be Dallah’s second pop­up dinner, following his takeover of 33 Acres Brewing last summer.

The menu will be his creation of Lebanese flavours in the form of tacos, as well as a desert involving Baklava. Expect a warm environment, good music, drinks, and people.

All the profits from food sales at the pop-up will be donated to services that help refugees settle in Canada. This is something that is important to Dallah because in the early 90s, when the Middle East was not a safe place to be, Canada allowed his family to make it their new home.

The Dallah Menu is a food brand created by Dallah (Abdallah El Chami). Dallah learned his way around the kitchen at a young age from his mother, first learning Lebanese food and then extending his reaches to Spanish and Asian flavours.

All our welcome from 6:30pm – 11pm, there are no advance tickets, just came as you are and you can purchase your tacos at this fun dinner event in Gastown. Happening at The Birds and The Beets | 55 Powell St, in Vancouver. Follow Dallah on twitter @thedallah