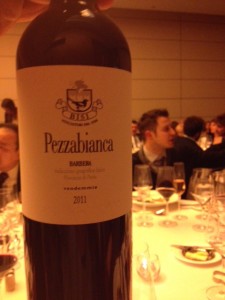 Vine stars from around the world will travel to Vancouver for the 38th Vancouver International Wine Festival, February 20 to 28 at the Vancouver Convention Centre and other venues in Metro Vancouver.

Each of the 155 wineries from the 14 participating countries will send a high-level representative (owner, winemaker, senior executive) to the festival to present their wines. They’ll participate in educational seminars, team up with Vancouver’s best restaurants for exclusive dinners and pour tastes of some of their top drops in the Acura Tasting Room. This year the theme country is Italy, which promises a week of spectacular wines and sophisticated vine stars. For details on the 54 festival events, check out the interactive Festival at a Glance at VanWineFest.ca, updated constantly with sales status.

THEME COUNTRY VINE STARS: ITALY
All 60 participating wineries from Italy will have a principal in attendance in the ITALIA! section of the Acura Tasting Room and at the sumptuous Saturday lunch, Taste ITALIA!.

Marilisa Allegrini, Owner/CEO, Allegrini
Marilisa Allegrini has been responsible for Allegrini’s marketing since 1980: guided by an instinctive passion for wine, she promotes Allegrini wines and the Valpolicella area throughout the world. Marilisa has also cast her eye further afield and set out on a fascinating “adventure” in Tuscany: in 2001, with her brother Walter, she founded Poggio al Tesoro in Bolgheri and in 2006, in partnership with Leonardo Lo Cascio, she purchased San Polo, a beautiful estate in Montalcino. Meet Marilisa Allegrini at the 13th Annual Awards Lunch; Legends of Italy.

Stefano Benini, International Export Director/Family Member, Marchesi de’Frescobaldi
Born in Florence, Stefano Benini represents the 30th generation of the Frescobaldi family. After completing university in Rome, he moved to New York to work in the family business as US sales manager. He established the first Italian-American partnership in the wine business, Luce della Vite, between the Frescobaldi and the Mondavi families. Shortly after, he returned to Italy to become export manager. In 2006, with the title of export director, he was appointed Vice President to the Board of Directors of the Compagnia de´ Frescobaldi. Meet Stefano Benini at Italy’s Autochthonous Red; Made in Italy; Legends of Italy; and Shades of Italy winery dinner at Federico’s Supper Club.

Pio Boffa, Owner, Pio Cesare
Pio Boffa is the great-grandson of Cesare Pio, the founder of Pio Cesare. Curiosity and the love of innovation in respect to tradition, led Pio to study wine areas in France, California and Australia. In 1972, he trained at Robert Mondavi Winery in California, working with the Mondavi family in the cellar. He continued studying but dedicated more and more time to the family winery, becoming totally involved in the company. Over the years, he has introduced modern wines such as Piodilei Chardonnay, Ornato Barolo, Il Bricco Barbaresco and Fides Barbera d’Alba to the Pio Cesare portfolio. Meet Pio Boffa at Made in Italy and Italy’s Great Wines.

Luca Currado, Owner/Winemaker, Vietti
In 1990, Luca Currado joined the family business as winemaker after working at California’s Simi Winery, Opus One, Long Vineyards and Bordeaux’s Mouton-Rothschild. His innovative wine-making utilizes a unique combination of the modern and traditional. Luca’s focus on terroir is reflected in his careful cultivation and organic farming of more than 25 single vineyards. Recently he eliminated equipment that measures acid and tannin levels in favor of a more intuitive, and wine-specific approach. Meet Luca Currado at Italy’s Indigenous Whites; Made in Italy; Legends of Italy.

Stefano Leone, Global Export Director, Marchesi Antinori
Stefano Leone joined Antinori in 1986. He worked for 10 years in the Italian market, before becoming executive sales manager in 1995. In 1996, he became Antinori’s export sales manager, in charge of 45 countries with a sales turnover of 36 million Euros. In 2003 he was promoted to executive export sales director. He has dramatically expanded the business, distributing Antinori in 142 countries around the world and doubling the sales turnover up to 90 million Euro. Meet Stefano Leone at Tuscan Trailblazers; Chianti Classico Close-up; Legends of Italy; and Heart of Tuscany winery dinner at Mangia E Bevi.

Francesco Ricasoli, President, Barone Ricasoli
Francesco Ricasoli, 32nd Baron of Brolio, began his career in advertising photography. In 1993, however, he bought back his family’s business after more than 20 years of foreign ownership. Barone Ricasoli has since won back its important clientele and prestige with the production of wines of the highest quality. In addition to his role as President of Barone Ricasoli, Francesco has a seat on the Board of the Consorzio Vino Chianti Classico, Unione Italiana Vini and Federvini. Meet Francesco Ricasoli at Bacchanalia Gala Dinner + Auction; Italy’s Great Wines; 1,000 Years in Tuscany; Made in Italy; Chianti Classico Close-up; Legends of Italy; and Dining with Tuscan Royalty winery dinner at La Terrazza.

Riccardo Tedeschi, Owner, Tedeschi
Since 1989, Riccardo Tedeschi has been the winemaker (with his father, Lorenzo) of the family-owned Tedeschi. He has developed modern techniques in the wine production, but at the same time he continues to favour local grape varieties (Corvina, Corvinone, Rondinella, Croatina, Dindarella, Negrara, Oseleta, Troelina). Riccardo also is in charge of international sales. Meet Riccardo Tedeschi at Italy’s Indigenous Whites; Excitement in a Glass; Legends of Italy; Dine Italia; and Tedeschi’s Valpolicella winery dinner at Blue Water Cafe.

Francesco Zonin, Executive Vice-President, Zonin 1821
Francesco Zonin was born in Vicenza in 1974 and graduated from the Università Bocconi in Milan. He gained key professional experience in the United States between 1998 and 2002, where he looked after the development of the American market and the sales networks of Zonin’s distributors in the US, as well as the family’s Barboursville Vineyards Estate in Virginia. Since 2002 he has been based at the company’s historic headquarter in Gambellara, coordinating sales and marketing activities both on the home and export markets. Meet Franceso Zonin at Spumate & Co.;Amaronely: Only Amarone; Made in Italy; and the 13th Annual Awards Lunch.

REST OF THE WORLD VINE STARS
Thirteen other countries are represented at VanWineFest, and the stars are shining just as brightly over the rest of the wine world. The Acura Tasting Room is the place to meet all 155 vine stars, but you’ll also find these great personalities at special events during the week.

David Koball, Director of Winegrowing, Bonterra Organic Vineyards
Since 1995, David Koball has been growing wine grapes in Mendocino County, all in certified Organic and Demeter certified Biodynamic® vineyards. His passion for agriculture and the land started early – growing up, he worked with his family farming olives, prunes, and walnuts. David joined Bonterra Vineyards in 2000 and current oversees production on 970 acres of certified organic land in Mendocino County, 284 acres of which is also certified Biodynamic®. Meet David Koball atCalifornia Cruisin’; and Sustainable & Sensational winery dinner at The Boathouse Kits Beach.

Brian Lynn, Owner/Director, Majella Wines
Brian Lynn, known as Prof to nearly everyone, and the elder of the Lynn brothers, looks after all the administration and marketing for Majella. As well as being the noisy one, he plays the piano and organ tolerably well, has an interest in the politics of the viticulture and wine industries, likes red wine, Malt Whisky and food. Meet Brian Lynn at Iconic Grapes Around the Globe; Cool Climate, Cool View; and the Bacchanalia Gala Dinner + Auction.

Ted Seghesio, GM & Winemaker, Seghesio Family Vineyards
Despite growing up next door to his family’s winery, Ted Seghesio first dreamed of becoming a baseball player. After university, however, Ted went to work at the family estate. In 1979 Ted started converting the Healdsburg bulk winery to premium varietal production, making the first wines under the Seghesio label. Ted’s wines have been named to Wine Spectator’s annual Top 100 List seven times. He has been honored with Decanter’s Best American Red Trophy in 2007, by Food & Wine’s American Wine Awards, and by the San Francisco Chronicle’s Wine Competition as Winemaker of the Year. Meet Ted Seghesio at California Cruisin’; Signature Pairings; and theShades of Italy winery dinner at Federico’s Supper Club.

Howard Soon, Master Winemaker, Sandhill
Howard Soon, 2015 VIWF Spirited Industry Professional, has been a trailblazer in the wine business for 35 years beginning with Andres Wines, Calona Vineyards, and at Sandhill. He is a certified wine educator and has served on the panels of major wine competitions in Canada and the US. Howard was the first BC winemaker to release a series of single vineyard designated wines, the first to produce a Super Tuscan blend and the first to receive Red, White and Winery of the Year at the Canadian Wine Awards in 2009. Meet Howard Soon at Signature Pairings; 25 Under $25; andShades of Italy winery dinner at Federico’s Supper Club.

Donald Triggs, Co-Proprietor, Culmina Family Estate Winery
Don Triggs began his career in the wine business with John Labatt, eventually becoming President of the Canadian wine division, and then the US division. Don left Labatt’s in 1982 to work for Fison North America and in 1989 partnered with Alan Jackson to co-found Jackson-Triggs, which became the most powerful wine brand in Canada. In June 2006, he embarked on the next chapter of his life – the culmination of his life’s work – starting Culmina Family Estate Winery with his family. Don now leads Culmina as co-proprietor and principal. Meet Don Triggs at Signature Pairings and thePursuit of Excellence winery dinner at Le Crocodile.

Started off 2022 and I have been cooking more duri