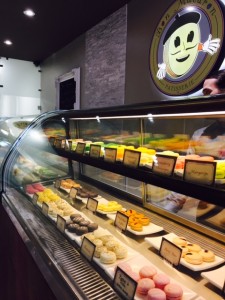 Bon Macaron Patisserie has gained a cult following in Victoria, BC since opening there in 2013. They have recently opened their 1st Vancouver location in Kitsilano and will open their 2nd location here in mid-September inside the Granville Island Public Market.

Owners David Boetti and Yann Fougere, both French, met at university in the South of France and later moved to BC, where Fougere completed his degree at University of Victoria’s prestigious Peter B. Gustavson School of Business. After working at several bakeries in Victoria—Fougere was manager at the iconic Murchie’s for four years—the friends opened a patisserie dedicated to macarons, the colourful, delectable confection now hugely popular around the world. Boetti and Fougere create an inventive and constantly expanding array of sweet and savoury macarons. They serve an appreciative market at scales ranging from single macarons to full weddings, with presentation options that include striking macaron cakes and towers. Macarons are always gluten-free, and dairy-free are versions available, making them the perfect treat for any group or scenario. 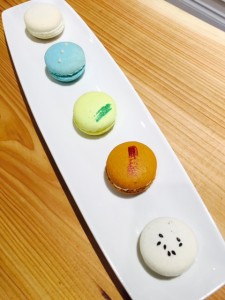 They specialize in both savoury and sweet Macarons. I tasted and some and loved the Goat cheese & fig, Earl Grey, Peanut Butter & Jelly, Black Sesame followed by the Yuzu.

Bon Macaron Patisserie has earned its many fans by adhering to the highest standards of quality in ingredients, preparation, and service, and by developing strong community ties through working extensively with local producers and charities. These standards will be carried over to Vancouver, where new flavours will regularly be created using ingredients sourced directly from the Granville Island Public Market. A winning fusion of French tradition and West Coast freshness and ingenuity, Bon Macaron is set to make a delicious, multi-coloured, multi-flavoured splash in Vancouver’s internationally renowned food scene.

Bon Macaron in Kitsilano is located at 2823 West Broadway and is open daily. Watch for their next location to open inside the Granville Island Public Market around September 10. Follow along on twiter @BonMacaronVic