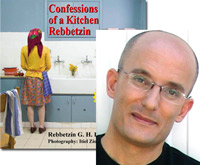 A Taste of Israel

It’s not every day that you can savour the secrets of a diverse cuisine while getting the inside scoop on how, where and why it was created from the master chef himself. Here is your chance to nosh on the very delicacies created according to the recipes of the eclectic and charming Gil Hovav, a Hebrew University alumnus, and one of Israel’s leading culinary journalists and media personalities.

Hovav has played a major role in changing Israeli cuisine from one of basic traditional foods to one of enviable gourmet dining, and is considered one of Israel’s superstar ‘foodies’.

A popular journalist and TV host, Hovav has been involved in creating, producing and presenting some of Israel’s most viewed and loved television food shows. These include Pepper, Garlic and Olive Oil, Captain Cook (which reviewed the world’s best restaurants), and Going to the Market. Hovav later turned these series into best-selling cookbooks.

As an author, he has published three best-selling novels (in Hebrew) all related to his family’s colourful history. His newest book, Confessions of a Kitchen Rebbetzin, has just been published in English. Hovav has lectured around the world and has led cooking demonstrations and seminars focusing on Israeli cuisine, spiced with his unique personal stories.

Brunch with Zak Santiago at The Sandbar