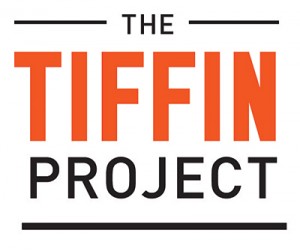 If you haven’t heard about The Tiffin Project yet, you are about too. First of all you need to get to know Hunter J. Moyes, I had the pleasure to speak at an East Van Love event back in February where I met Hunter for the first time, he was co-emcee at the event. At the time Hunter was a chef at The Waldorf Hotel/Nuba, on the side he was gearing up to launch a non-profit organization called The Tiffin Project. Months forward I invited him to speak at my first Food Talks Vol. 1 event held last month, this is where I got a full understanding of what The Tiffin Project was all about. 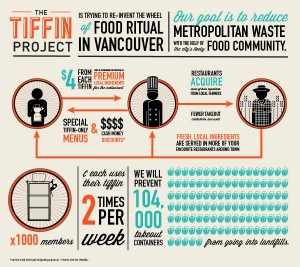 Hunter describes himself as a food activist, to get a better understanding on what that really means, you can watch Hunter J. Moyes talk that we filmed when he spoke at the food talks event last month. Next thing is you have to realize that most of the Take-Out containers you get from the restaurants you patronize are going to end up in the garbage and the landfills and that is not a sustainable solution. The Tiffin Project involves you and will benefit you, instead of purchasing food for take-out and receiving a cardboard box or tin at restaurants around the city, you would now bring in a takeout container to pack up your own leftovers at your favourite restaurants, or to use as a takeout container for food to go. $4 from the sale of each Tiffin container will go into a subsidy program that will be paying the project’s restaurant partners to buy more local produce for their menus.

It is a re-usable TO GO container which you can purchase for $26 at participating restaurants, many of the restaurants will then provide you with a discount off of the meals you order each time you bring in this Tiffin for them to fill. I hope this successful as its going to revolutionize food take-out in and outside of Vancouver.

Here are the restaurant partners that are now on board along with their launch dates:

The Noodle Box: LAUNCHED: July 1st, 2012 –they have 2 locations in Vancouver and 5 locations on Vancouver Island.

The deal: They are offering $1 off of any transaction using a Tiffin Project container.

The deal: On Thursdays, you can go to Granville Island to visit Curry2U and fill your Tiffin Project unit for $5 with any of their vegetarian items.

If you are an owner of a restaurant or food truck in the Vancouver area then I would encourage you to get involved and be a leader in sustainable food take-out. If you are a consumer who will benefit from the environment by being sustainable and obtaining discounts on your food purchases then you now know who to patronize.

Tasting Brunch at The Bibo