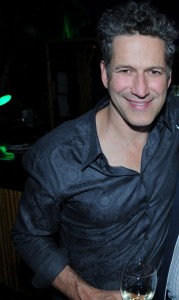 I met up with Bob Blumer, star of the World’s Weirdest Restaurants while he was in Vancouver a few days ago and we had coffee together at The Wicked Café. His new show premierres on Food Network Canada beginning April 4, 2012.

Out of the 52 episodes of the World’s Weirdest Restaurants that has been filmed in the first season, in which cities did you encounter the weirdest?

Tokyo and we filmed 15 weird restaurants there.

Were there any foods that you ate during the filming that you never thought you would eat? And what were those?

You are known to be a Culinary Adventurer, can you put that into perspective for our readers on your definition?

I have a lust for life, and I love food and I love adventure and I have managed to put that all into perspective any my job.

What is the differential element of this show “World’s Weirdest Restaurants” to your other shows “Glutton for Punishment” and “Surreal Gourmet”?

This show I am the host who brings the audience with me to discover these restaurants. The restaurants are the real stars of the show.

How many restaurants were suggested or in the pool so to speak before it was narrowed down to 52 restaurants?

Did you encounter any surprises out of the ordinary or not so ordinary during your filming?

Tokyo – there was an all mayonnaise restaurant and the food was so gross. After filming the segment we scrapped it.

What do you want our readers to know about the World’s Weirdest Restaurants?

I love the fast pace, in every episode they will see so much in a short period of time. We cram 5 minutes of info in what other segments would do in 30 minutes.

What do you want your viewers to learn from you in this show?

Big, bad, wild, wacky, weird world out there and if you stick with me you will get to see a whole lot of it.

In Tokyo do they think the weird is the norm? 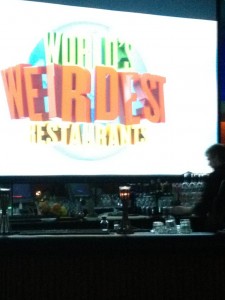 Dinner at The Waldorf Hotel in Vancouver

How did the dinner at the Waldorf Hotel that I attended last night come about?

The dinner was my idea that I conceived about 6 weeks ago and we did one in Toronto and then in Vancouver where we collaborated with chefs Cesar de la Parra and Ernesto Gomez. Cesar and Ernesto worked on the menu with me and prepared 4 different selections that referenced 4 of the episodes on the World`s Weirdest Restaurants tv show.

Will there be a book as well?

With the amount of time it takes to film and research there is no time to even write a blog about it.

WIN 2 Tickets to Naramata at the River