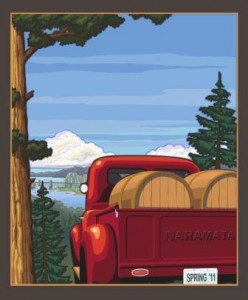 On Tuesday, April 24, Naramata Bench Wineries will hold their annual Spring Wine Release Event from 6:30-9:00 PM, at the River Market in the heart of New Westminster.

Guests will experience the year’s first wine releases paired with delicacies from restaurants from Metro Vancouver including the Hamilton Street Grill and Hart House Restaurant; and Naramata’s own Hillside Bistro. The Naramata Bench Wineries are known for presenting their wines in fun and dynamic ways and this year’s Spring Release is no exception. Naramata on the River, an Exclusive Evening of Wine, Food, Art & Music, is a co-op event with The BC Cultural Crawl, an organization creating the best of BC arts experiences.

In addition to being the first to taste the Naramata Spring Release wines and sumptuous morsels of culinary artistry from restaurants from Greater Vancouver, attendees will also meet the winemakers at Naramata on the River. During the evening there will be an opportunity to bid on Naramata wines, exclusive Naramata Wine Country Getaways and Behind the Scenes Wine Experiences, proceeds in support of BC Cultural Crawl.

Tickets $85 per person available at www.bcculturalcrawl.com

I entered to win 2 Tickets to Naramata at the River via @vanfoodster #ContestGiveaway http://bit.ly/HmwZpf RT to enter!

All submissions will be entered to win for the random draw. The winner of this contest will be announced via twitter and posted.  The contest giveaway is to enter to Win 2 Tickets to Naramata at the River (value $170).

Fine Print: Contest will run until 11pm on 4/11/12 You must enter your full name and twitter address if you have one and register with your email address when entering the contest.