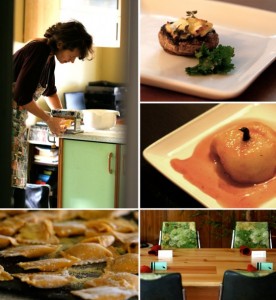 Celebrity Chef and Food Network Star Bob Blumer is Vancouver bound, on his televised, international hunt for The Worlds Weirdest Restaurant. Swallow Tail Secret Supper Club runs underground culinary events here in Vancouver, and their Alice In Wonderland themed Pop-Up Restaurant has got Blumer’s interest piqued. The Pop-Up will serve 5 playful courses, inspired by Alice In Wonderland, and characters from the story will interact with guests through the evening as they adventure through Alice’s world. Open for only 9 seatings before it disappears forever, the Pop-Up will be held at a secret location, revealed to guests 1 week before their seating on Nov 26, Dec 3 or Dec 16, 2011.

The evening starts at the outskirts of a moonlit forest, where guests are greeted by a frantic White Rabbit, who ushers them down the rabbit hole, to a nostalgic world of childhood fairytale characters. The Mad Hatter pours tea and soup is served in a “Drink Me” bottle labeled either “Big” or “Small”. The bottle guests drink from will determine their next course.

Asked “what’s a Pop-Up Restaurant?” Robin Kort, Chef & Owner of Swallow Tail responds “A Pop-Up Restaurant is where creativity in the kitchen is at it’s highest level. Renegade Chefs invite guests into the back alleys of the city to hidden locations to experience conceptual, one time only menus.”

The other partners in this event are In The House Festival – a theater group who will be performing the Alice In Wonderland Characters, and Chef Chashma of Pastiche: Culinary Concepts, who will be Queen of the kitchen.

Bookings are open to the public, though at the time of writing, there are only a handful left. The price is $129, which includes 5 courses, entertainment, and a cocktail. BYO wine. Email robin@swallowtailtours.com for bookings.