Gold Medal Plates is the ultimate celebration of Canadian Excellence in cuisine, wine, the arts and athletic achievement. Celebrating in eight cities across Canada in 2011 including Vancouver on November 4th, Gold Medal Plates will feature superb wines and the premier chefs in each city, paired with Canadian Olympic and Paralympic athletes, in a competition to crown a gold, silver and bronze medal culinary team in each city, and subsequently nation-wide.

I had the opportunity again this year to interview some of the award winning chefs in the line-up of the upcoming Gold Medal Plates Awards in Vancouver. I asked each chef the same 4 questions and of course each had very different answers, I also asked that each chef would create one of their own signature dishes for me to taste during our interview.

The first chef that I interviewed was Chef Rob Feenie at Cactus Club. 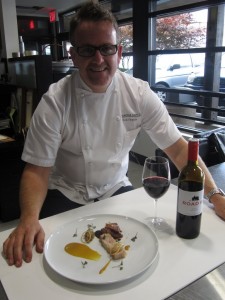 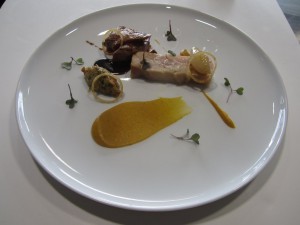 Since Gold Metal Plates is the ultimate wine and food pairing competition, my number one goal is to create that perfect match between the best in fresh, local ingredients and balance it with the wine. With so many spectacular BC wines to choose from, I am lucky to have Sebastien Le Goff, who recently joined Cactus Club, help with the selection.

Above all, it’s really about creating a dish that is memorable.  I don’t want to give away too much before the big event, but in addition to using the best fresh ingredients, we’re also using the notes and the balance of the wine as inspiration and plan on having a few surprises to wow everyone at the competition as well.

What makes this event so exciting and fun is the opportunity to push yourself and your fellow chefs to push boundaries and create an unforgettable culinary experience – and it’s all for a great cause!

Charlie Trotter once told me that perfection is impossible but excellence is achievable, so I strive for excellence every day. I have had the privilege of working with some of the best chefs from all around the world and I have so many of them to thank for teaching me that anything is possible.

When I started out, I never thought I would achieve Relais Gourmand and Traditions et Qualitè designations or the AAA Five Diamond Award, but I always knew I was bold and would push myself.  No matter what you do, if you’re brave enough to step outside your comfort zone, the possibilities are endless. This is something I try to encourage with some of the young chefs who I work with today at Cactus Club.

I actually feel pretty blessed to be able to say I have been able to do everything I ever wished for – and even more – throughout my career.  From the incredible experiences of my early career to having the opportunity to now work for one of the most successful restaurant companies in Canada. I have had many dreams come true.

Well, being native to Vancouver, the city, the bounty of local products and the vibrant restaurant community will always have a special place in my heart.

But there are so many cities I love for their food and that have influenced my career, from Paris, to Tokyo, to Barcelona….but if I had to pick just one, I fell in love with French food and the city of Paris when I visited at 14 and the experience left a huge imprint on my life and my career.

The second chef that I interviewed was Chef Alana Peckham at CRU Restaurant. 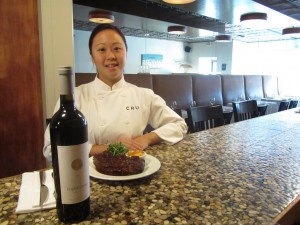 Her dish: Syrah-braised Beef Short Rib with macaroni and cheese 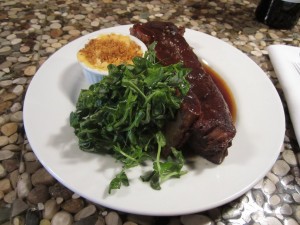 When creating a dish for an event such as the Gold Medal Plates, I need to consider balance in flavour while allowing for boldness and big taste. I think of complimentary textures, flavours and colours when considering a main protein and accompanying garnishes. Gold Medal Plates requires that an alcoholic beverage be paired with the food so when creating a dish I also keep in mind that it needs to compliment the wine and not allow the dish to over power the wine or the wine to overpower the dish. I always create dishes based on balance so naturally when thinking of a dish for an event that would be my main focus.

As a chef pushing the boundary and achieving excellence are very personal and individual goals. What one chef considers to be boundaries and excellence may not be what another chef aspires to achieve. I believe that boundary pushing involves making sure that what I do tomorrow is better than what I did today. To continue learning and being open minded to different ideas and techniques while achieving consistency is what I aim to do everyday. My beliefs in food are all about great product and allowing it to be center focus in a dish. Achieving excellence is about maintaining a reputation and consistency in the food that I serve.

As a chef, I work daily with local produce and protein which I have a great respect for. Unfortunately, I have not had the opportunity to farm this produce or sacrifice the protein with which I cook. If given the chance I would like to be able to be feel and experience from start to finish, product to plate. I think that it would be a great personal achievement for myself and that it would strengthen me as a chef.

4)      What is your Favourite food city around the world and why?

I can’t say that I have a favourite food city in the world because I have not yet travelled to enough cities to be able to label one of them as my favourite. New York is a major food city that I hope to visit in the future because it offers diversity and it is home to many well know and well accomplished chefs.

The third chef that I interviewed was Chef Adam Pegg at La Quercia. 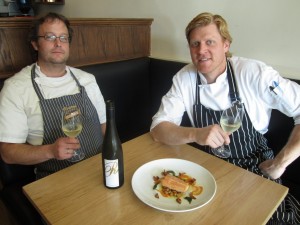 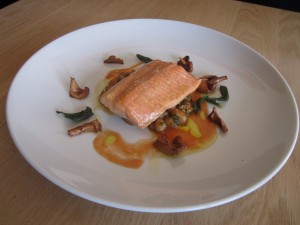 We like to stick to the classics and this is a dish one will find at La Quercia on many occasions. It is important that many components of the dish are ready to go before the event so there are less untimely surprises.

We just try to so all the simple things as good as possible and as much as this may sound like the easy way we believe it is much harder to do the simple things right than it is to complicate a dish with too many ingredients.

My favorite food city in the world is any small town in Italy doing the classics right. Do I need to say anymore?

2011 Competing Chefs in Vancouver are:

Judging the 2011 competition in Vancouver will be: Sid Cross, Andrew Morrison, Lesley Stowe, Barbara-Jo McIntosh, and last year’s Vancouver winner, Chef Robert Clark, who will also be cooking for the VIP reception that precedes the main event. Each dish will be judged out of 100 points, based on visual presentation (20%), texture (20%), taste (30%), wine compatibility (10%), originality (10%) and wow factor (10%).

Gold Medal Plates Vancouver will once again feature a silent auction as well as a live auction, featuring spectacular getaways with Olympians and Canadian entertainers to destinations such as Tuscany, Napa Valley, Chile, Provence, Burgundy and Kelowna for the Canadian Gold Medal Plates finals.

Music for the evening will be provided by Canadian legends Barney Bentall (Barney Bentall and the Legendary Hearts), Alan Doyle (Great Big Sea) and other musicians, who’ll treat guests to an evening of British classics.

For ticket information for the 2011 Gold Medal Plates competition in Vancouver, click here.

Some of the chefs competing in the 2011 awards also competed in 2010, see my interview with last years chefs here and a recap of the 2010 Gold Medal Plate Awards can be read here.

When 11 of BC’s top chefs do battle in Vancouver at the 2011 Gold Medal Plates competition, cheering them on will be 28 Canadian Olympic and Paralympic athletes, including 17 medal winners such as Marnie McBean (Triple Gold in Rowing), Simon Whitfield (Gold and Silver in Triathalon), Ashleigh McIvor (Gold in Ski Cross) and Steve Podborski (Bronze in Alpine Skiing), along with athletes that will be competing for Canada in London in 2012.