Vancouver Foodster celebrates our 2-year anniversary with a party online

In celebration of our 2nd anniversary, vancouverfoodster.com is throwing a big party online and you are invited! You might be asking yourself how can you attend an online party, well first of all anyone and everyone is invited, you don’t have to worry about line-ups, parking or parking tickets.

So you were curious as to what an online anniversary celebration was all about, welcome to the party celebrating Vancouver Foodster 2 years online today! Over the next 23 hours you will have the opportunity to play some games, write some stories, enter contests to win valuable prizes from 64 restaurants in and out of the Vancouver area!

Tune in frequently or watch @vanfoodster on twitter starting now throughout the next 23 hours for all sorts of opportunities to enter and win! 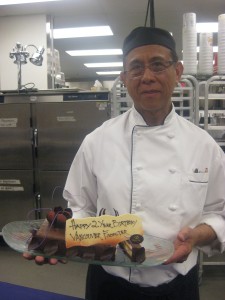 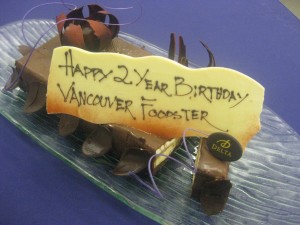 I had a wonderful surprised this afternoon as Chef Romeo Maghirang presented me with Happy 2 yr Birthday Vancouver Foodster Cake to celebrate todayès birthday. I then Interviewed him and tasted some of his desserts for a future article!

5 lucky people get to join Richard Wolak at an exclusive dinner of cocktails, food & wine on August 11 at a secret restaurant downtown Vancouver.

The prize is valued at $200 per person and includes a variety of tasty dishes, cocktails and wine and a special Vancouver Foodster 2 Year Anniversary Gift.

12 lucky people will have a chance to dine at one of these wonderful restaurants around Vancouver, you just have to follow the contest details (below) and tell us Which Vancouver restaurant has treated you to the best Tasting experience ever and why?

The prize is valued at $50 per person

6 lucky people who answers each and every question correctly will be awarded one of the prizes, the 1st 6 people that answer all questions correctly will win one of these fabulous tasty prizes!

The prize is valued at $100 per person

3 lucky people Which restaurant in the Vancouver area has your favourite brunch?

9 lucky people – Which 3 restaurants in the Vancouver area are your favourites for Lunch?

6 lucky people – What types of cuisine would you like to see in Vancouver restaurants and why?

9 lucky people win 2 tickets each to an exclusive Chocolate Making Class – What is your Favourite Chocolate dessert and why?

Last year we celebrated our 1st year anniversary party with a big bash at Canvas Lounge with 550 people in attendance! This year for the 2nd Anniversary I want all our followers to have a chance to attend virtually that is. In a nutshell the party takes place on Thursday July 28th and will go on all day and will be participatory in various ways. Many restaurants and bars from around the Vancouver area are participating by donating all sorts of tasty prizes (see list below and watch for more to be added)!

One $25 gift card that is redeemable for both Vancouver and whistler locations.

Two $25 gift certificates to Doolin’s Irish Pub, try out some of the new menu items.

One dinner for 2 (exclusive of beverage and gratuities)

One dinner for two – value is $85 and does not include wine.

One $50 Gift Card for Friday lunch for two – which is valid from now through the end of September.

One gift cert for dinner for 2 (food only) valued at $120 at North Vancouver location only.

The Lobby Restaurant at the Pinnacle Pier

One Weekend Brunch for two in the Lobby Restaurant (to a value of $65).

One Lunch for two off the lunch specials board’ excluding alcohol, expires 31 August 2011.

One Lunch for two

One Lunch or Dinner for Two

One lobster, beef and chocolate dinner for 2 (value is $130) excluding alcohol.

at each of our 4 locations.

One $50 Gift Card for lunch

One Seasonal Recipes from the celebrated Whistler restaurant cookbook ($45 value)

One $75 gift card to any Earls location in BC

One Westcost Afternoon Tea for Two – $29 per person (min. 2 persons). This includes fresh, seasonal platter of open-face sandwiches and delectable sweets – B.C. style. It is valued at $64.96 for two people (includes tax). Available at both locations.

So now you are probably wondering how you can participate and take your chance at winning the above listed prizes, tune in to this web page on Thursday July 28th, the party starts at 12:05 am and continues throughout the day! Please invite your friends to join us!

Brunch at Market by Jean-Georges