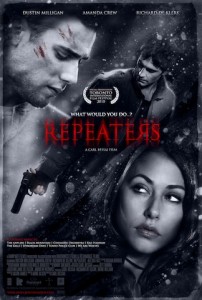 Carl Bessai’s REPEATERS is a thriller that follows three young addicts in a rehab centre who are stuck living out the same day’s events over and over again, stuck in a personal hell of sorts.

As it happens, the day that they are forced to repeat is the Wednesday when they are granted a one-day-pass to visit and make amends with those they have wronged.  Kyle’s (Dustin Milligan) sister refuses to speak to him, Sonia’s (Amanda Crew) abusive, ailing father dies later in the day after she decides not to confront him, and Weeks (Richard de Klerk) visits his violent father in prison, which sparks both rage and feelings of powerlessness.

This may not sound like a day that anyone wants to repeat, but the protagonists must do just that. Each day they wake up to the same day. Freed from consequences, they begin to take things to a great extreme, both physically and emotionally, searching for meaning…

To enter, tell me about your favourite Carl Bessai film by commenting below with your email address or twitter address and retweet the following:

You have until Friday May 20th at 4pm to enter in the comments below. The winner will be announced via twitter and posted on this page.

Fine Print: You must enter your full name and include your Twitter address if you have one, and register with your email address when entering the contest.