Mac & Cheese defines comfort food at many restaurants  throughout North America, some go the traditional route with a basic dish of Macaroni noodles and sauce and others jazz them up with different shaped noodles, some add lobster, and other gourmet ingredients. I did not just taste the dish, I ate each full dish. I have spent over a month sampling my away around Vancouver to find the BEST Mac & Cheese!

Note: You may not agree with my opinion as my taste may not be your taste. The prices indicated exclude tax and were for one Mac & Cheese dish. I only visited places in Vancouver, I did not venture into the suburbs on this quest.

In ranking order, these are my favourite Mac & Cheese dishes around Vancouver.

Very good Lobster Mac & Cheese, creamy, cheesy with lots of lobster pieces, good flavour & rich! Made with Gruyere, blue cheese, sharp cheddar and parmesan with a Bechamel sauce that had a little garlic and shallots. Nicely presented in an All-Clad steel dish! This was the very best I had out of all of the Mac & Cheese dishes I tried, and the price was affordable based on the type of ingredients in the dish. 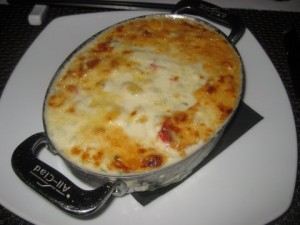 Big chunks of lobster in this dish making this one super rich and tasty. The Hennessey bisque made this dish, it was absolutely delicious and was a fine meal that came with some greens and garlic toast. 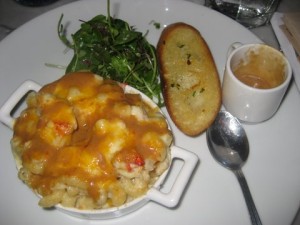 Large dish made with gorgonzola, Sardo parmesan, and white cheddar on top. The rich and delicious sauce was made with cream, roasted garlic, splash of Tabasco, leeks and shallots. The Strip loin beef hot dog is seasoned with mustard powder and paprika. Pricewise this Mac & Cheese is value and it is a meal for a great price. 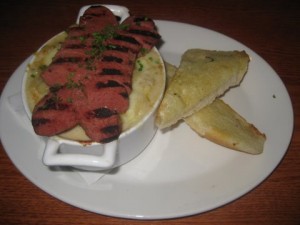 Elegantly presented in a ceramic bowl this dish was made with Farmhouse Cheddar and Black Truffle. The Béchamel sauce is made with milk (not cream) made very creamy, good and rich taste, topped with shaved truffle mushrooms. 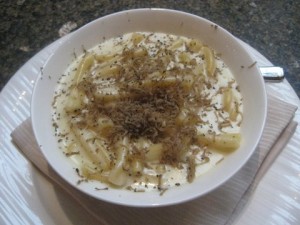 This dish was made with Gruyere, white cheddar, orange cheddar, stilton. Loaded with cheese, the orange cheddar on top was a nice touch though was not melted enough breadcrumbs were on top of the cheese, but the Stilton cheese was overpowering in taste which overdid my palate. 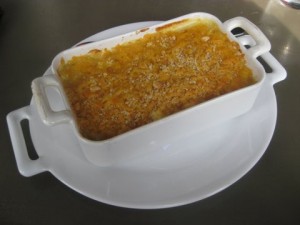 Served as a meal this dish was made with a creamy béchamel sauce, topped with cheddar cheese and bread crumbs, baked in white ceramic dish and nicely lightly browned, however I couldn’t taste the breadcrumbs topping. 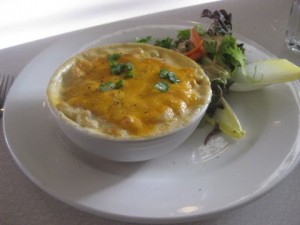 Loaded with aged white cheddar, baked golden brown. This Mac & Cheese was pretty good, gooey, and cheesy goodness. The waiter offered me ketchup, hot sauce and pepper for my mac & cheese and I was a bit puzzled and declined as I wanted to try the Mac and Cheese as they prepared it. 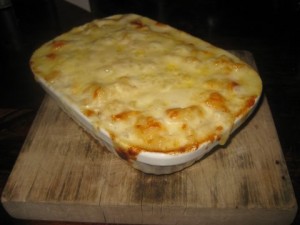 Made with Winter truffles and parmesan gratin, this dish was tasty, not over powering with the truffle, the size of the dish makes it easy not to over eat and it is not too rich this way. Nice presentation with little black skillet and served with a slice of garlic toast and greens, however the price was a little too high for this type of dish. 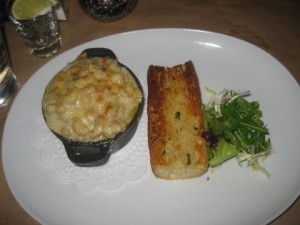 This dish was topped with a crumbly bread crumb mixture and sundried tomatoes and did not have much flavour. It had a creamy, cheesy sauce, however the whole dish had a bland flavour overall. It’s over priced in comparison to other Mac & Cheese dishes I had around the city. 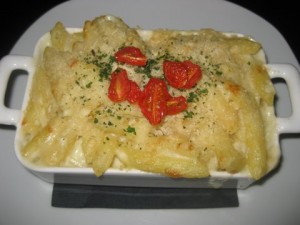 Their Mac & Cheese is on offer most days and it is on their hot buffet bar and is sold by weight. I scooped a portion on to the plate and this was tasty, rich and cheesy, however there was too much butter and when heated in the microwave it is was too oily. 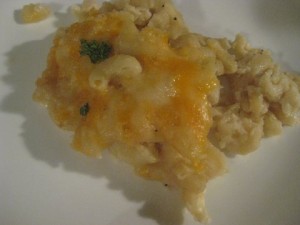 Do you have a favourite Mac & Cheese from a restaurant around Vancouver or in the suburbs?

Feel free to add your comment here and name the place and their location, the cost of each excluding tax and why you think they are the best!