Bartender and Co-Proprietor Jay Jones takes me behind the bar and into the kitchen on a tour of their Gastown restaurant. My ‘Behind The Scenes” tour began a month before opening over an Espresso with Jay at Smartmouth Café in Gastown. We talked about design, food, coffee, restaurants, bars and history and moved on to the vision that Jay and his other 4 partners had for Pourhouse. These guys had well thought out plans, each of the partners were playing a significant but very different role in creation of Pourhouse. Fast tracking to now, after a few weeks since opening, thus the tour begins. 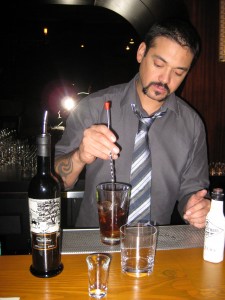 Jay Jones at the Bar

Talking with Jay is inspiring, he is a great story teller and you will want to sit at his bar and talk about everything under the sun, well maybe not everything, I am sure their will be some great conversation. 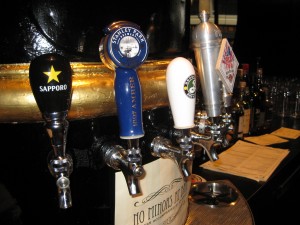 On Tap - The Beer Tap Lineup 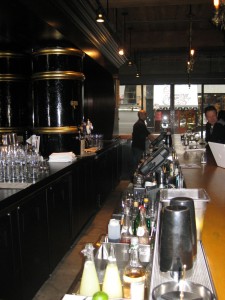 The Bar - Going Behind The Bar

Part of this great story of creating the long wooden topped bar, begins here in the outskirts of Vancouver at a local farm, not just any farm, Vista D’oro Farms in Langley where Jay found a huge piece of wood in their barn, and that was the basis for this beautiful long wooden bar top. 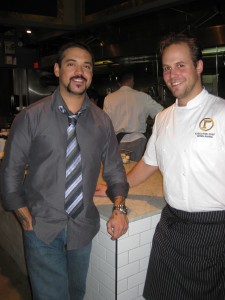 His career really took off 10 years ago in Whistler, when he had a great opportunity to be the Bar Manager at Araxi – his wine knowledge soared, and he was soon offered a role in opening West (originally Ouest) back in hometown Vancouver. He was given the Bar Manager & Wine Director role, and held that position for 5 years. He then left West to assist in opening Nu Restaurant as Bar Director. This then followed by becoming the General Manager of Salt Tasting Room. A year later he left to join Donnelly Hospitality Management and take on a corporate position as Bar & Beverage Manager – overseeing a variety of development throughout the company’s several pubs and nightclubs – involved in the launch of The Modern as well as Pop Opera, and working intimately with the cocktail program at Granville Room. Last year Jay moved to Loden Vancouver, to take the role of Head Bartender at Voya. Which brings him to this year – where Jay and his Pourhouse partners found their beloved location in Gastown.

Born and raised in Whitehorse, Chris got his start at The Wickaninnish Inn in Tofino. He then worked as a chef at West in Vancouver (this is where he met Jay Jones), followed by 2 years in London, UK at Petruse (under Gordon Ramsay). Throughout his culinary travels, he keeps coming back and calling this place home. Nowhere else he has lived, boasts such a brilliant diversity of culture, geography, gastronomy and the incredible social element of our hospitality industry. Chris is honoured to call Vancouver home. 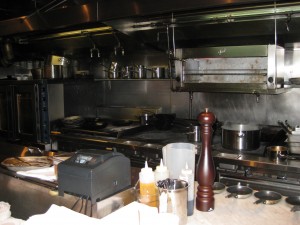 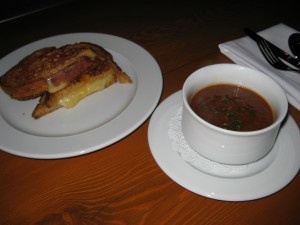 One of the feature selections on the menu is this grilled cheese sandwich with a bowl of house roasted tomato soup. 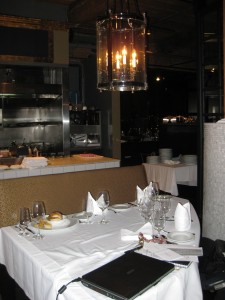 This is the star of the restaurant, with only one seating each night, serves up to 6 people and must be booked at least 48 hours in advance. You will enjoy a selection of the Chefs creations that aren’t on the menu. 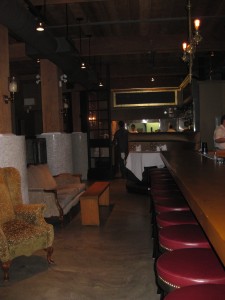 Seating at the Bar 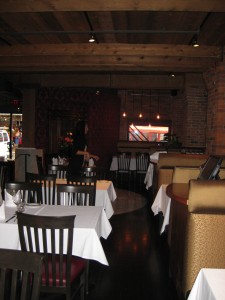 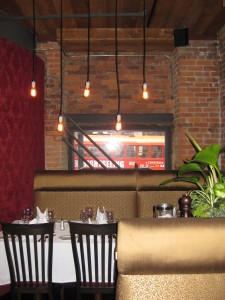 Dining under the Edison lightbulbs

Pourhouse is a late 19th century inspiration with most of their furniture and antique pieces having been inspired by the mid 1800’s to early 20th century says Jay. Everything from  the walls, tables, chairs, upholstery, crown molding, chandeliers and even the bathrooms have a history behind them. Welcome back to Gastown to where Vancouver’s history began and to Pourhouse where great food, drink and ambiance begins.

Pourhouse is located at 162 Water Street in Gastown at http://www.pourhousevancouver.com/