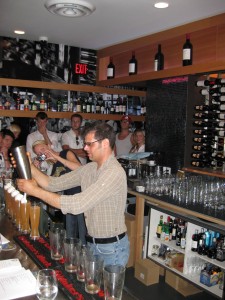 The Refinery in Vancouver was the host of “Canada’s First Ever Beer Inspired Mixology Competition” that was sponsored by The Whistler Brewing Company.  The event was held on Monday August 17th and there were 15 competitors representing bars and restaurants from around Vancouver and Victoria.

The point of the competition was to showcase 2 things, the first being that Vancouver (+surrounding areas) mixologists have created a dynamic community in which the sky is ultimately the limit for their creations; the second and what better then to use The Whistler Brewing Company beers as a catalyst to showcase this city’s talent in creating signature contemporary cocktails for such a unique competition. Lauren Mote of The Refinery was chief organizer of this amazing fete!

The Mixologists Competition and the Lowdown