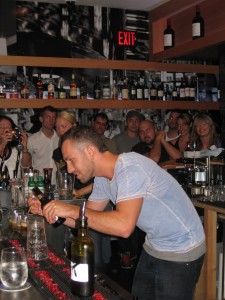 Kris Jensen of The Refinery in competition

The Refinery in Vancouver was the host of “Canada’s First Ever Beer Inspired Mixology Competition” that was sponsored by The Whistler Brewing Company.  The event was held on Monday August 17th, here is the lowdown on what was required for each of the competitors.
1. The cocktail must incorporate 1 of the 5 fantastic beers from Whistler Brewing Company
2. Each participant received a 5-pack of different beers to experiment with
3. The day of the competition, each participant created their cocktail LIVE from behind THE REFINERY wood.
4. Each participant was required to bring their own ingredients – and Whistler Beer was provided! 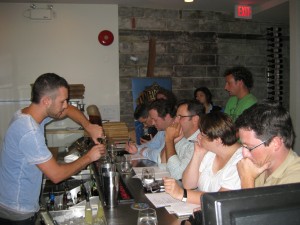 Kris Jenson of The Refinery in front of the Judges

This amazing team of Judges had to not only taste each of the 15 beer inspired beverages but pay attention to every single detail throughout the 3 hour competition.

The Refinery Hosted the Mixologists …..