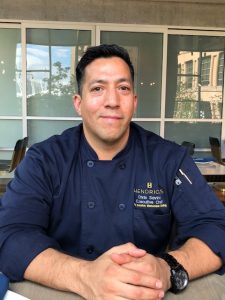 Chris began his culinary career when he enrolled in the Culinary Arts program at Vancouver Community College in 2000. After completing the one year program in 2001 he spent a summer in Arizona working, then returned to Vancouver and worked at the Plaza 500 Hotel for 4 years. At the same time, he worked in the kitchen for 1 year at the Boathouse. He then moved on to The Westin Grand starting off as a 2nd cook for both Aria and Hidden restaurants; he was promoted to first cook, chef de partie and eventually to sous chef. He then moved on to The Riverway Clubhouse in Burnaby as head chef for one year. A position then opened up back at the Westin Grand for Executive Chef which he applied for and returned to take on the position of where he remains today running the hotel’s food services as well as Hendricks Restaurant, he has held this position for the past 5 years. 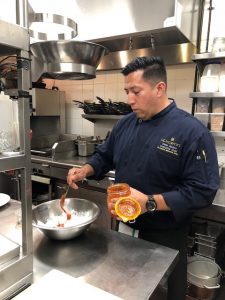 I understand your Uncle and Grandfather were both professional chefs, how did they both influence your career?

Overall how did your work in hotels over the years affect you?

I have come a long way in the industry, when I started off I was quite shy and reserved. But over the years I have developed the confidence and skills from working with a bunch of great chefs along the way.

Plating dishes has totally changed since I began my career. Starting off you had the urgency to just get everything on the plate, now it is how you place the various components of a dish, how the flavors go together and textures.

Previously it was oily and fatty; recently it’s been moving towards clean eating and meal prep where less is more. Now it is about creating healthy, staples and fun flavours. 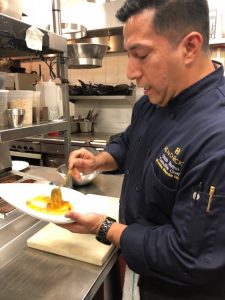 What is it you like about the playfulness when it comes to your menu and dishes?

I like to surprise guests palate. Take traditional dishes and add a playful twist.

Do you have to follow the Westin standards in your cooking?

We have to offer the popular fare such as club sandwiches, burgers and other staples that people expect especially the travellers. The breakfast buffet has to have a certain amount of super food items on it to stay on brand. Other than a few minor things I can pretty much do what I want to the menu. 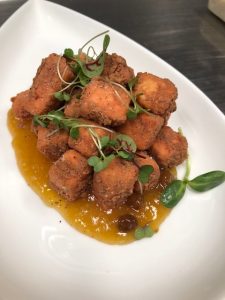 My inspiration for this dish comes from an old childhood favorite of mine “popcorn chicken” with most people worried about eating fried chicken these days i wanted a healthier way so i used Paneer cheese and treated it like fried chicken. I know its not healthy but it is a healthier option than traditions fried chicken. 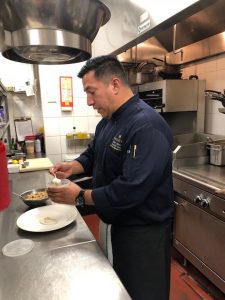 I understand you have internal competitions at your hotel. Tell our readers what that involves.

The Director of food and beverage and I judge the creations that our team members create, judging each dish for flavour, presentation, style and budget. In one of the recent competitions the winner got their dish added to our menu and they won a set of knives. 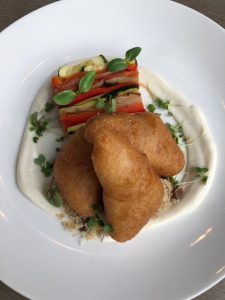 My inspiration for this dish come from a dinner party my director of F&B hosted, They served a pan seared halloumi with Mediterranean veggies and baba ghanoush. While i was eating it i was thinking this would be great deep fried from there I starting tinkering with different frying methods and treating it like fish and chips was a clear winner. 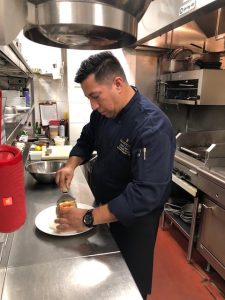 Yes, at home I cook more for meal prep for me and my wife, next is making baby food.

What are your Guilty Pleasures at home? 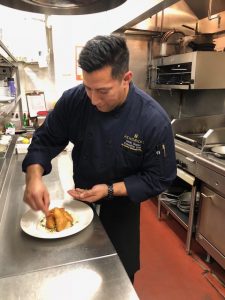 What is your drink of choice?

What dish on your menu at Hendricks pairs with a beer? 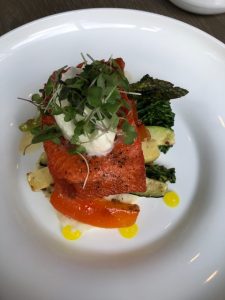 Late summer, early fall is where the inspiration for this dish comes from. heavier items for the fall so I used a lemon potato puree & the sockeye screams late summer then we added lemon fluid gel and feta cheese creme fraiche.

What are your Top Sellers in Hendricks restaurant?

Chefs in the Hood on October 20