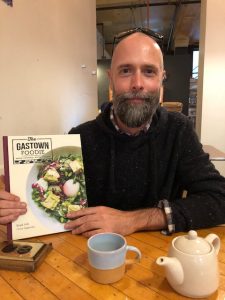 I had an opportunity to sit down with Brad Hill at Nelson the Seagull café, one of the beautiful cafes in Brad Hill’s latest book. The Gastown Foodie is a snapshot of the foodie culture of Gastown in stories, recipes and images. It’s a beautiful guide to great places to eat and drink in Gastown but also offers the back-stories and inspiration behinds its foodie businesses.

What got you into Photography?

My dad bought me a Pentax P30 when I was young, I grew up in a small country town, 400 km East of Melbourne in Australia. I used the camera a lot, travelled, years later, I ended up heading to England and took photography classes, ended up getting lots of work and left school to purse my career in Photography.

You have been celebrating the food culture of our city ever since you published North Van Foodie, which was followed by East Van Foodie and now Gastown Foodie, what inspired you to create these books? And the series?

I moved here in mid 2014, had some spare time and an idea to create the North Van Foodie book, North Van book was first because that is where I settled in to live.

When eating out in restaurants what type of food do you like to eat?

The weird things, I eat things I want to see more of.

What is your favourite food that you cook at home?

Comfort food, lately I am loving Japanese curry on rice and make the curry from scratch.

Wine or Beer, which do you enjoy personally?

I love both, Wine with a good meal.

How long did it take to put The Gastown Foodie book together?

Basically 7-8 months to put it together but about a year from the idea.

Are you still doing photography as your career?

It used to be my day job, now it is my evening job. 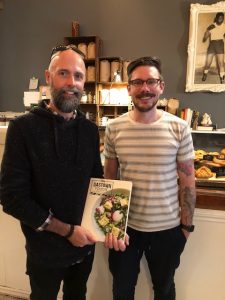 I also had a chance to chat with Jonathan Snelgar Co-owner and baker at Nelson the Seagull Café who is one of the leading bakers in not only the Gastown neighborhood but in Vancouver and he has been working his craft for many years.

Prior to your own books in Vancouver, what did you do?

I was the photographer for some coffee table books in Melbourne, Australia.

Years ago I lived in Banff, and I was on a short term holiday visa. I had intended to move to Vancouver, specifically to Gastown, it never materialized, took 10 years for me to get back here. In the back of my mind, was to do Gastown as a book.

His latest cookbook, The Gastown Foodie is self-published and you can get this book along with his others in most of the restaurants and establishments that are featured in the book, as well as online here.

The restaurant and fictional stories were written by Chris Dagenais.