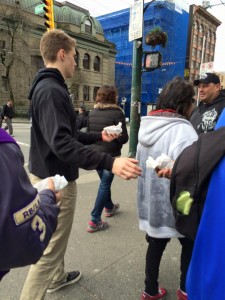 I recently learned of a group of local highschool students who have been distributing food weekly to residents of the downtown east side through donations of a few generous businesses who have since been somewhat anonymous. When we all purchase our produce and food at markets around it’s often of the best quality, those markets previously had a fair amount of wastage.

In October 2015, Gogan, owner of The August Market on Main Street made a status on Facebook asking if anyone knew food charities. Joey Scorda, owner of Lumin Concepts and Design, did shelving and furnishings for The August Market’s store previously and commented and passed along his sister’s name. That week she met with Gogan. His donations vary each week and have included huge amounts of bread, pita pockets, dairy products, vegetables, fruits, chips, desserts, and much more. The group’s leaders are so grateful to him and he is making it possible for them to not only supply sandwiches, but a variety of other food that offers much more nutritional and substantial food options for the residents. He has also become their primary place to shop for other miscellaneous ingredients as he has the most reasonable prices. They really can not thank him enough for all that he has given and continues to give each week.

Bumpin Bakery Foundation which is a registered non-profit organization started in September 2014 from an idea of a couple of high school students. It only took a couple of weeks before they were spending each Sunday on the corner of Main and Hastings, with just 50 muffins per week. One of the co-founders, Dugie Turner, lived on the eastside and witnessed first hand the poverty stricken neighbourhood. Eager to give back to his community, he began talking to his friends and brainstorming. Giving out muffins each week seemed to be a good place to start. “We then became a registered non-profit organization of British Columbia in February of 2015. When we became registered, we began telling our peers what we were doing and generated an enormous amount of support and help from them. We have come a long way from where we started. On a given Sunday now we have up to 400 muffins or baked goods, 200 sandwiches, 150 cups of coffee as well as fruit, vegetables, and various snacks.” Says Amanda Scorda. 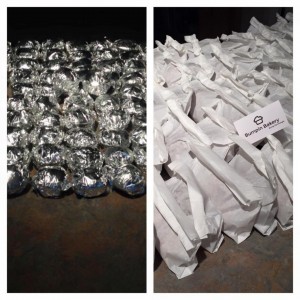 Previous to The August Market’s involvement they were just making muffins to go along with coffee on Sunday mornings. They had made sandwiches once previously and they were the most appreciated food item of the residents of the DTES. However, they did not have the funds to buy the ingredients necessary for sandwiches each week.

The Bumpin Bakery Foundation student organizers include Amanda Scorda who attends Little Flower Academy (grade 12), the other co-founders attend Vancouver College (grade 12) and Dugie Turner graduated from VC and is now in first year at Acadia University in Nova Scotia.

I asked Amanda if the idea started from a school project or was if was her idea; Amanda said, “As I mentioned above, the idea really sparked from a group of us high school students eager to give back to our community. It satisfied school required volunteer hours but has sustained from our persistent efforts. What began as a small group of friends making a difference has evolved into a really passionate group of people eager to shift perspective in our community.”

Now that I am aware of this incredible community service that these youth are doing. I think it is time that other markets and food producers get involved and not only support these kids who are making a difference to the lives of so many people on the DTES, but also solve their food wastage issues.

I asked Amanda, what her group wants to achieve from the service they are providing to people in the DTES; Amanda said, “Each Sunday we are given the opportunity to talk to the many residents and hear their unique stories. We would like to continue to form and strengthen these friendships as we learn to better serve them. Additionally, we would like to generate more awareness about poverty in our city and the different things people can do to help. Because we are entirely youth orientated, we also want to demonstrate the enormous impact young people can make.”

Outside of The August Market’s generous donations, they receive coffee each week from Bean Around the World and sometimes cupcakes from Cupcakes.

I then asked Amanda, “If their was one food item you feel should be added to what you are already distributing what would it be?” She said, “Soup! It’s packed with nutrients and everyone loves a bowl of soup on a cold day”.

I asked Amanda, if her group could you use more markets or other food companies donations to better serve people in the DTES to ultimately serve more people.

Amanda said, “Yes definitely. We have never struggled to give food away each Sunday, rather run out and have had to turn people away.”

If you are a farmer, producer or involved in the food industry locally in one way or another, consider reducing your food wastage and lend hand to support these amazing teenagers who are giving up so much of their time to feed the homeless in the downtown east side DTES. You can find the Bumpin Bakery Foundation here or email them at bumpin.bakery.corp@gmail.com