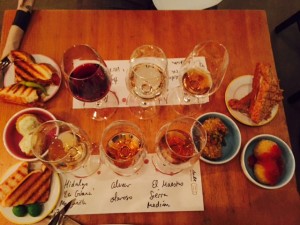 Just as you would stop at a gas station for some delicious delicacies driving in Italy, Salt Tasting Room is featuring what they call the Italian Gas Station experiment during February. My friend Ajay joined me for a tasting flight as well as a selection of Italian tapas (Cichetti). I had a flight of Sherry while he had a selection of wines along with one sherry. We enjoyed the complimentary selection of Venetian Tea sandwiches (Tramessini) with cheese, salami and olive tapenade; as well as the fresh sausages sous vide in a jar which were served with croisstini, along with the Urbani Arancini Risottoballs (also called ‘Polpette di Riso’) which are the most popular street food in Italy.

Salt Tasting Room has partnered with their long time supplier, the Urbani family at Port Moody-based Urbani Foods to offer complimentary samples of their products, which are inspired by gas station snacks in one of Europe’s most beloved food spots. Basically it goes like this, guests who order wine, by the glass, flight or bottle, will be able to order free Italian tapas (Cichetti).

Not your typical North American gas station fare, the food that Italian motorists refuel with is sought after and anything but boring. The ‘Italian Gas Station Experiment’ runs through February 29, offered Mondays through Sundays from 4-6pm at Salt Tasting Room which is located at 45 Blood Alley Square in Gastown. For more information or to book a reservation, email info@salttastingroom.com.