It is great to see teenagers getting excited about cooking and food in general. These young people are a few Vancouver teenage chefs who are making themselves known, passionate and exuberent, you will want to keep your eye on them as they excel in years to come. 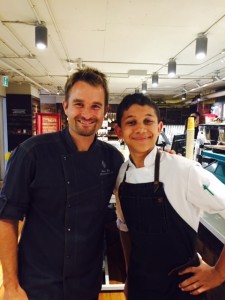 Liam Lewis is known as the Little Locavore

He is a 13 year old Chef-in-training who started cooking when he was 8 years old.

Passionate about trying all different types of food and learning how to cook them. Liam runs his own blog, The Little Locavore, which follows his cooking adventures. He is quite the celebrity already and he has plans to become a chef, in the meantime he has had all sorts of wonderful experiences working with leading chefs in Vancouver and beyond including Chef Ned Bell, Chef Clement Chan, Chef Vikram Vij, Chef David Hawksworth and many others.

He has created his own line of Organic Beet Ketchup, he has judged several competitions, including judging a pie competition with me and a couple other chefs last year. He has had cooking appearances on many of local tv shows, and participated in many events.

When he isn’t cooking or in school, he is an ice dancer.

This 14-yr-old Vancouver chef makes multi-course meals based on artistic inspirations. He started cooking when he was 11 years old after doing an Iron Chef competition at school.

He did his first pop up dinner because his former babysitter Stephanie was housesitting for his family over their vacation, once she found out about his interest in cooking, she asked in lieu of payment if Victor could cook a multi-course gourmet Pop up dinner for her and 8 friends. This pretty much kicked off his interest in creating pop-up dinners which take place in his parents home.

He themes his popup dinners, he did a Gershwin’s “Rhapsody in Blue” dinner as well as The Storm’s-a-Coming! inspired by nature’s cycle of destruction and rejuvenation.

When Victor isn’t cooking he plays his clarinet in 5 orchestras and a concert band, and he loves learning languages, he is currently learning Italian and Russian.

Skylar and Chloe known as the Kids Can Cook Gourmet

Kids Can Cook Gourmet is comprised of of a teenage brother and sister duo cooking with passion. Skylar –Le Petit Chef and Chloe – Director of Marketing & Fun

Last year Skylar and Chloe spent a year travelling around Europe with their parents. During this adventure they were homeschooled and they started a writing project, a way to learn more about local foods and how to put together a business plan.

After coming back to Vancouver the two siblings created a food products company – Kids Can Cook Gourmet – they currently produce a Pasta sauce which is sold in many retailers around the city including Urban Fare, Pomme Markets and some Save on Foods.

I profiled these chefs on CKNW 980 AM in my feature on Teenage Chefs on my show “The Best and the Foodiest”.

Brunch with Goldie Hoffman at The Flying Pig