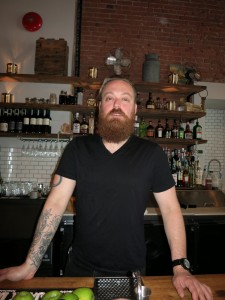 Nathan came to Vancouver from Toronto where he had many years of experience in the hospitality industry as well as background in marketing and administration. He won 3rd place in the Vancouver Foodster Caesar Challenge in 2015. He owns and founded Bar Culture which he started a few years ago while in Toronto. Currently he is the Bar Manager of Catch 122 in Gastown.

Let’s just say that I ended up falling into it. A friend owned a bar about three years ago and he asked me to come work for him in the kitchen with shifts opening up on the floor. I actually ended up working full time on the bar and found I had a knack for it. Another truth is that when in the kitchen I’m pretty animated and tended to upset my colleagues that were less chipper than myself, so naturally people were insisting that I should try slinging booze instead.

Where did your love to become a Chef begin?

It was Pasquale the “singing chef” that wooed me into it, it all started by just taking what I had access to in the fridge at home and playing around with it. In ’97 I landed my first kitchen job where I worked as fryer cook earning the title of “Fryer God”. A few years later and a wasted semester at college I found myself in an apprenticeship.

Tell our readers about Bar Culture

Bar Culture started when I realized that there was more to the bartending world then what I knew. It was pretty hard to find people that were super outgoing and willing to just commit to spending time teaching. I found that most cocktail bars wanted you to have experience, which my many years in the kitchen should have been enough now that I know this and have the experience. Anyhow, I started a blog where I went to some top bartenders and talked to them about cocktails, the business and anything in and around that. This ended up getting me in the door as far as getting comfortable inside the scene. Soon I was attending competitions, building my own cocktail menus at my work and running creative programs (bands, DJ’s etc). I have since decided to turn it into an industry podcast and am waiting on a few things to fall into line before I pick it back up.

What are some of the unique cocktails your customers have asked you to make.

Most cocktails are not unique anymore. You could pretty much go anywhere and try a drink and say “hey that’s sorta like this cocktail I had once” or “that’s a play on this classic I know”. Really as far as unique in this sense would be what is the rarest or oddest request. I think I’ve rarely had one where someone asks me for a flip or a royal fizz using the whole egg. In that respect I tend to take and artistic approach and let it handle itself as I go based on my read on the guest. One night I had a lot of fun pulling Blazers from tin to tin as a birthday girl requested a hot cocktail. The event ended with zero fatalities.

A lot of the time it’s just a feeling or a flavour combination I’ve been thinking about for some time. I tend to lean towards bigger, fuller flavours as that’s my usual go to as a drinker. One of the things about moving out west it made me really focus on what the palette of Vancouver was about. I find it’s generally a softer, citrus/fruity and refreshing. Where when in Toronto people would ask for their Negronis with bitters and Old Fashioneds with more.

I’m a purist in a way. I cook my steaks with rendered bacon fat and like to keep my veggies whole. But in the same time I obsess about good ramen and love to make my own broth and noodles. When it comes to drinks I need bitter and booze forward most of the time it’ll just be straight bourbon.

Ramen! Pork jowl to be precise! Then there’s pizza and pasta. I have an issue with pasta and it’s because I tend to be a huge snob and no one ever cooks it just right. Except for the one time I went to Ask for Luigi. That was some awesome pasta. I also dream about being on a boat when a tuna gets pulled in and eating it right there with some fresh soy and wasabi.

Where do you get your inspiration to create your cocktails at Catch 122?

I’d have to say from my shelf, friends, maybe something I’m reading or listening to at the time. I am a really big metal-head and love to think about what a song means to me. I once named a cocktail after the Pantera song “Great Southern Trendkill” but really I like to think of something I haven’t done or something that is seasonal and focus on pairing them with ingredients that I know I can get behind.

Tell our readers about shrubs in cocktails

Well I’ve been using them for about two years now and I honestly can’t remember how I got started on it but I do remember my first one. I took some Bosc Pears and poached them in red wine and spices then macerated them in sugar for 8 hours and strained it out through a cheese cloth and used balsamic vinegar as my acidic ingredient. This went into a drink I made for V-day called “My Bitter Valentine”. It was awesome! Since then I’ve made a bunch of different flavours. I tend to mainly use it in lieu of what would be a sweetening agent to help balance out the more bitter or higher proof ingredients.

Same as before, I like booze forward unless it’s a traditional daiquiri or a margarita. I’m not big on drinking elaborate cocktails unless it’s something that really peaks my interest. A negroni, manhattan, sazerac or a boulevardier will be suffice most of the time. Let’s be honest I wont say no to a decent bourbon, ever.

I’d be in the kitchen, I’ve done customer relations for a small company before and enjoyed it. I’ve actually been planning on taking up a hobby in ring making for men or blacksmithing. Ha or both!

I’d have to say my own bitters are pretty unique. I make a salty licorice that is amazing and actually started a following of more simpler classics like an old fashioned and a negroni. I called it “Dutch Treat”. My view on bitters in a cocktail is sort of like seasoning as a chef and one day I said “why not use salt?” and ended up trying it out and it worked! I now love salt in my negroni.

Honestly I really don’t have one specific favorite, but I’ll not pass up anything with chartreuse, bourbon, campari or fernet in it!

The Keg’s Lobster Menu for Summer 2015