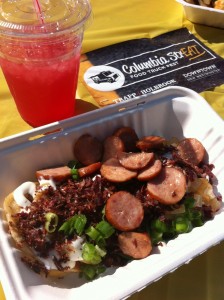 After massive success in 2013, this year’s fest will the biggest in the province, with 50+ food trucks including Japadog, Vij’s Railway Express, Johnny’s Pops, Yolk’s Breakfasts and Taser Grilled Cheese, all of which made the Vancity Buzz top 10 Food Trucks in Vancouver List. These trucks, along with many others, will be lining the table-filled street so that everyone can come down and Get Trucked Up!

Robert Fung of Trapp + Holbrook commented, “Salient is really excited to be a part of this event and, with Trapp+Holbrook, to be part of the Columbia Street evolution. Downtown New West continues to draw people as a great urban neighbourhood and dynamic place to live. There’s a strong sense of community here that is filled with energy from people sharing something special. The Columbia StrEAT Food Truck Fest is yet again a testimony to how progressive this town is, and how it has already blown the culinary and entrepreneurial doors off! Get used to coming to Downtown New West for great food and a great sense of belonging. If you haven’t experienced it already, I invite you to come down and have a taste!”

Support the festival and become a Certified Trucker for only $30. Certified Truckers receive two complimentary Steel & Oak craft beers, guaranteed seating in The Met’s beer garden and a branded trucker hat. “We’re super excited to not only be able to pair our beer with so many great food trucks coming to Columbia Street, but also to be able to get out in the community that we love and let them enjoy the brews we’ve created for them.” – Jorden Foss of Steel & Oak. Certified Trucker passes will go on sale August 1st.

The festival will also feature an outdoor mini Royal City Farmers Market and a kids zone hosted by the New West Food Action Committee and Kids New West. The Columbia, Heritage Grill, and The Met Bar & Grill will host 19+ expanded patios where you’re in the middle of all the action!