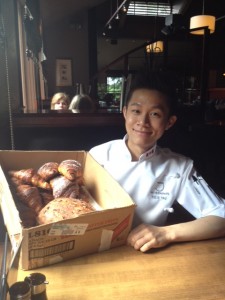 Today, I had the pleasure to meet Chef Felix Yau who I had learned about on Instagram a few months ago. His Instagram photos of his baking lead me to follow and get to know him in the virtual space. He is young, passionate and has a knack for baking beautiful artisanal loaves of bread and croissants which he does in his spare time between shifts as one of the chefs at Joey Restaurant in Coquitlam.

Felix took foods classes throughout highschool, he studied culinary in Grade 12, he then worked for Earls Restaurants for 3 years working his way up to Sous Chef, he has worked for Cactus Club Restaurants, as well as Chadz and has been with Joey Restaurants since December 2013. 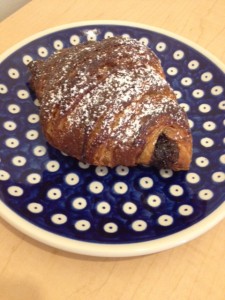 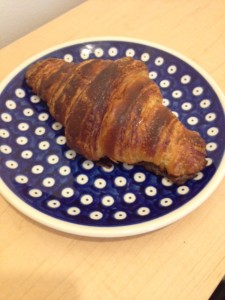 In our discussions over Instagram and Twitter I suggested he try some of the local patisseries filled croissants for ideas which he did and then he created his signature Maple glazed chocolate filled Croissants made with cacao berry chocolate, butter from Golden Ears Cheeseworks and uses sourdough based flour from Anitas Organic Flourmill in the Fraser Valley. He also bakes Plain Butter Croissants with the same sourdough base as the latter. Additionally he makes beautiful loaves of Artisan bread such as theFruit Nut Loaf he made for me that was filled with cranberries, currants, almonds, pecans and pumpkin seed and Anita’s organic flour.

At present Felix is only baking for his friends and fellow staff at Joey Restaurant, those are some fortunate people who are receiving his delicious treats. I see a bright future for him as he continues his baking and culinary journey. You can follow Felix on instagram and follow him on Twitter @JustRelaxnChill