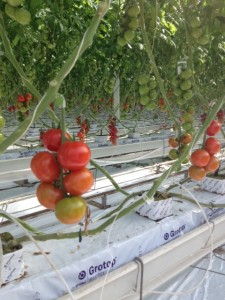 Tomatoes on the vine at Village Farms

I had the opportunity to learn all about how tomatoes are grown in greenhouses just outside of the city yesterday, with a visit to Village Farms in Ladner. This was the largest greenhouse I have ever seen, it was a 13 hectares block housing 520,000 tomato plants that aren’t grown in soil, each plant sits in a coconut husk, utilizing a self-composting system. Several varieties of tomatoes are grown here, with picking every day, some varieties are picked 2-3 times each week. The greenhouse operates 10 months of the year beginning in February running through to November. 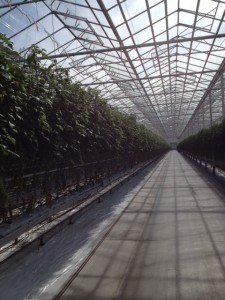 It is quite the sophisticated set-up in each of these greenhouses, bee pollination is a key element. I had a great chat with the owners of The Bug Factory who facilitate the delivery of bugs to the greenhouses each week. The lifespan is 8-10 weeks for the bees in the greenhouse. 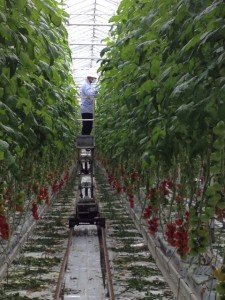 Non GMO seed used in greenhouses for growing vegetables in bc, Village Farms has 3 farms in Ladner, one only grows Tomatoes, the other two grow Cucumbers and Peppers, they export 60-80% of their product to the USA. 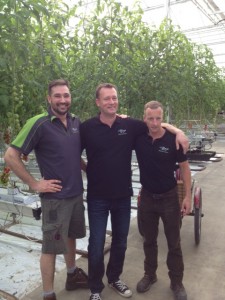 On Thursday March 20, the BC Greenhouse Growers Association will kick-off the first celebration known as BC Veggie Day. This celebration of vegetables will celebrate the locally grown greenhouse veggies from BC’s 42 Greenhouse Growers located throughout the Lower Mainland. During the long, dreary winter months our greenhouses are full of activity as new seedlings mature into ripe crops. The fresh tomatoes, cucumbers, peppers, lettuce and more are harvested and arrive in stores in time for the first day of spring on Thursday, March 20th.

As part of the inaugural BC Veggie Day this year, there are lots of exciting events and initiatives planned. Taking place at the Vancouver Art Gallery north plaza on March 20th from 11am – 2pm is the BC Veggie Day Bash featuring a pop-up greenhouse filled with plants and ‘good’ bugs from the Bug Factory, a farmer’s market, live entertainment by emcee Prevail from Swollen Members and the 7 member Vince Vaccaro Band, a first ever pop-up restaurant by Earls Kitchen + Bar and food trucks Verinicey Pakoras and Mangal Kiss. March 20th will be declared “BC Veggie Day” in a special proclamation at noon.