For my fifty sixth brunch in this series, I was joined by Singer, Author and Actor, Bob McGrath at The Teahouse in Stanley Park. 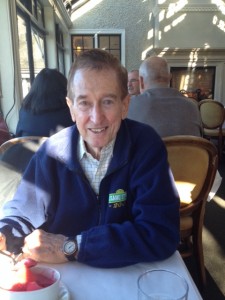 Robert Emmet “Bob” McGrath was born in Ottawa, Illinois.  McGrath is a 1954 graduate of the University of Michigan’s School of Music. While attending Michigan, he was a member of the University of Michigan Men’s Glee Club. He worked with Mitch Miller and was the featured tenor on Miller’s television singalong series Sing Along with Mitch for five seasons from 1959 to 1964.

In the mid-1960s, McGrath became a well-known recording artist in Japan, releasing a series of successful albums of Irish and other folksongs and ballads sung in Japanese. This aspect of his career was the basis of his “secret” when he appeared on the game shows To Tell the Truth in 1966 and I’ve Got a Secret (February 20, 1967).

He is best known for playing the human character Bob Johnson on Sesame Street and he has been on the show for the past 45 years. He has written many children’s books, including Uh Oh! Gotta Go! and OOPS! Excuse Me Please!.

Bob has hosted the British Columbia, Variety’s Show of Hearts Telethon for the past 41 years and is here in Vancouver where I had the opportunity to dine with him over brunch.

It’s a long story, when I was 5 years old, my family inherited a piano from my grandmother. I remember having memorized a song that I had played on the piano, I began my career singing professionally at 6 years old. I sang throughout my school years, had my own radio show in high school, then sang from halls to synagogues, and then got my Masters in music from the Manhattan School of Music.  I was then doing commercials and Broadway shows (all choral as a light lyric tenor). I did a 1 month tour of Las Vegas which lead to touring Japan, this opportunity prompted me to take some acting classes and do some opera.

How did your Singing career develop?

A lyric tenor, I began my professional career singing and recording with the Robert Shaw Chorale and Fred Waring’s Pennsylvanians and I worked with musicians and conductors such as Leonard Bernstein, Pablo Casals and Igor Stravinsky. I spent five years as the featured tenor soloist on Mitch Miller’s popular NBC television series, “Sing Along With Mitch.”  As a result of a Mitch Miller tour, I was invited back to Japan and became a star with a teenage fan club.

How did you get started on Sesame Street?

I bumped into a fraternity buddy of mine, he was a writer, he told me he was getting involved in a kids show and asked me if I was interested. He threw my name in the hat which resulted in my getting a call to audition for Jim Henson. They chose a cast of four including me which took me by surprise. In the 1st year we did 130 shows over a 7 month period. I roomed with Mr. Hooper who helped me with acting.

What is your favourite story line on Sesame Street?

The automatic soup serving soup spoon ‘Oscar and Bob” – one of Oscar’s cheap tricks that suckered me in.

What is the favourite thing the writers dressed you up in?

It was more than one, a full sized spider, banana and you name it.

How many shows of Sesame Street have you done over the years since you have been on the show?

4000 + shows, we are now in seen in 140 English speaking countries along with 50 foreign co-productions.

What is it about the British Columbia, Variety’s Show of Hearts Telethon that has brought you back to host it year after year?

It’s a little like going to a family reunion or a high school reunion, where you see the people that you have seen year after year (in production and the volunteers).  It is one of these reunions where some events happened, you then see what the money raised has done for the kids in BC.

Outside of Sesame Street, and your singing career, what else do you do?

I have my own recording company “Bob’s Kids Music”

I understand you have been coming to Canada over the years to host another telethon, which one and where?

For the past 35 years I have also hosted the Kinsman telethon “Telemiracle” in Saskatchewan and it takes place in March.

What are your favourite Foods?

As I mentioned, I grew up on a farm and we had all our own food, I love all sorts of meats, I also love Japanese food (from sushi to shabu shabu) as well as Australian lamb chops. 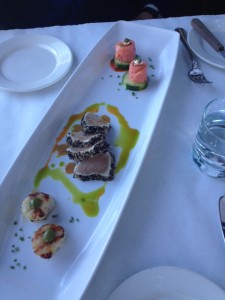 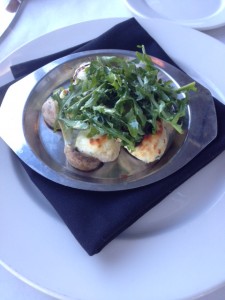 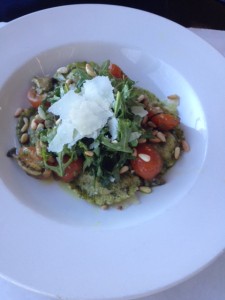 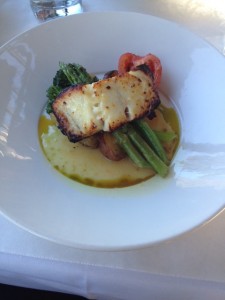 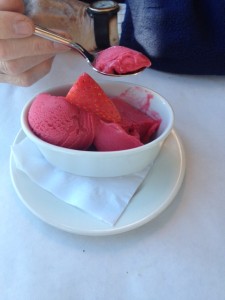 Bob and Richard shared a platter of Scallops, seared Sesame Crusted Tuna and Salmon; Bob and Richard then shared the signature Stuffed Mushrooms of which the restaurant is known for. Bob then had the Wild Mushroom Ravioli while Richard had the Sablefish. For dessert Bob had the Sorbet.

2)    New website developed by my daughter (she works for PBS) and my webmaster, BobMcGrath.com