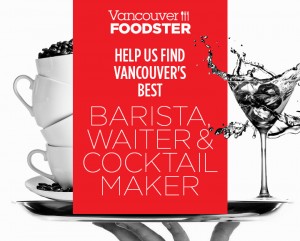 We received a couple thousand nominations for people all over Vancouver since our Barista, Waiter, Cocktail Maker competition launched last month. There can only be one winner in each category. Who did you choose as the numero uno? Who makes the best coffee, cocktails, and excels in service in our city’s restaurants?

THE TOP THREE ARE:

I have also listed all of the people that were nominated in each of the categories as these people should all be recognized for the work that they do, day in and day out.

Thank you to everyone who took the time to nominate the best of the best and congratulations to all who were nominated. Watch for interviews with each of the winners coming up soon.