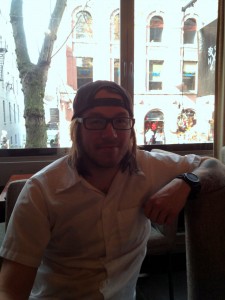 Jimmy attended Dubrulle International Culinary Arts in 2005 right after he graduated high school, he lasted 6 months. While at school, he worked at The Beachside Café in West Vancouver for 6 months until it closed. He then worked at CinCin as a prep cook for 4 months, was then promoted to  Chef/Garmange, moved up the ladder after 2 years. He tried to get a job at Lumierre and bugged Chef Dale Mackay everyday for 2 weeks, he finally got in to stage. Dale then hooked him up with a job in England at Maze (Gordon Ramsey’s restaurant), Jimmy stayed in England for 1-1/2 years, then went to The Ledbury (Maze competitor) to be the demi Chef de Partie (The Ledbury was amazing and so different than Maze) he was part of the team that made pastry (was there for 4-1/2 months). His visa expired and he had to return to Canada, he ended up going to Windsor ( to follow his girlfriend whom he met while in England) where he lasted 2 months. He then moved to Toronto and worked at Colburn Lane ending as a Jr Sous Chef. Then worked as the Raw Bar Chef at Origin for 4 months, he then moved back to Vancouver and went straight to DB Moderne. He then quit his job and moved to Whistler to go snowboarding, ended up getting a job as a Dishwasher at The Bearfoot as that was all he wanted to do, He didn’t want the responsibility he wanted to snowboard. Andre and Chef Melissa wouldn’t let him be a dishwasher, he was then hired to work in the kitchen as the Sous Chef. From there he applied to Top Chef Canada. Jimmy auditioned for the show and got on the show, came in 6th place. After the show he went back to The Bearfoot in Whistler and worked as the Exec Sous Chef for a year. Moved to Vancouver and took a job with Gourmet Syndicate working on the Roaming Dragon food truck for 6 months, he was helping out at Fable Kitchen as well, through a connection he got an interview at House Guest and soon-after joined House Guest in early 2013 as their Executive Chef. 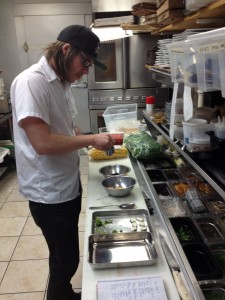 What are the top 3 things you have learned in the past few years?

1)    Importance of your palette

Where did you learn foraging?

Brett at  The Ledbury – I saw the food at Noma (Denmark), took a trip to the Yukon, met up with a woman who showed me everything that was growing there, I learned so much. Then while I was back in Whistler, I went walking and picked stuff in the woods. All types of mushrooms and weeds, and took it to work at The Bearfoot, from pine shoots, cranberries and more. 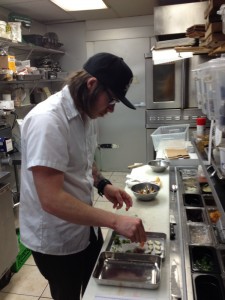 What does Presentation on the plate mean to you?

At The Ledbury, Colborne Lane, and CinCin –It’s all about what’s there, tell a story with your food and it has to taste really good. (Passion behind the dish and presentation). 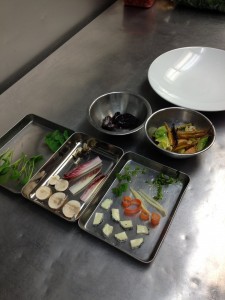 What is your Favourite Food?

What are your favourite Restaurants outside of where you work? 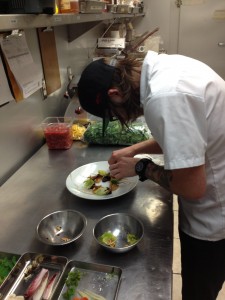 Name 5 Ingredients you love to cook with 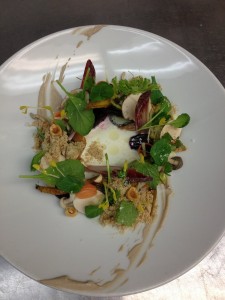 My fave dish I ever made under another chef. I wanted to take it to the next level, I wanted to make now early in my career. 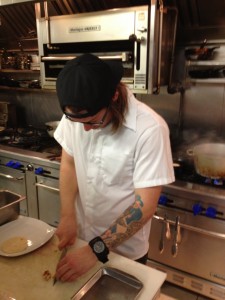 How did you get a Tuna Tattoo?

I was living in Toronto, the restaurant closed for the day due to a power outage, I went out with a bottle of rum with the other chefs, went to Chinatown and ate then went back to my house and we all drank. Me and the meat cook went out to get tattoos, she got a pig tattoo and I got a tuna tattoo. 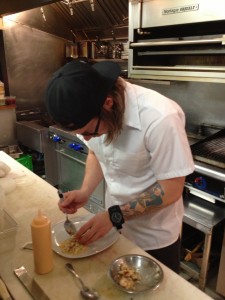 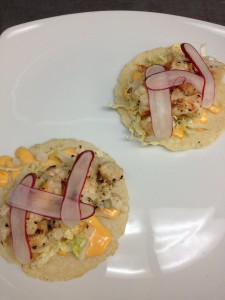 Girls, the ladies came in and ate tacos like the guys and not feel bad about it.

How do you create the dishes you do to appeal to everyone?

I want to appease the date night people, the late night crowd, people love brunch and I love brunch. I’m researching food and products. Learning to put myself in the diners shoes, I go out and I appreciate what other restaurants do as well.

Husband vs. Wife – a Chef’s Challenge on May 29