For my thirty ninth brunch in this series, I was joined by Actor, Singer, Dancer, Gig Morton at House Guest in Vancouver talking about Acting, Singing, Dancing and more. 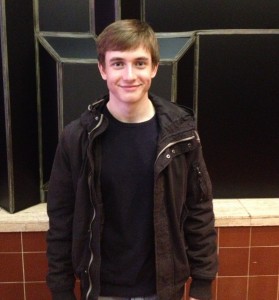 Gig Morton is an almost 17 year old Canadian actor who grew up in Courtenay on Vancouver Island, Morton is a six time Young Artist Award nominee, best known for his role as B-Dawg’s boy, “Billy” in four installments of the Air Buddies film franchise, Air Buddies, Snow Buddies, Space Buddies, and Santa Buddies, as well as for his co-starring role as “Derby” on the Canadian teen sitcom, Mr. Young since the show began.

After discovering his love for musical theatre, Morton would go on to appear in numerous musical stage productions, including lead roles in the Vanier Senior Secondary’s production of Adventures in the Forest, the Red Room Studio’s production of Oliver! and the Courtenay Little Theatre’s production of Peter Pan.

I started community theatre when I was 7 years old. My older siblings were doing it, my mom asked me to give it a try and I loved it.

What was your favourite role you ever played in a Theatrical production?

The Wizard of Oz, the director liked how I listened so well for a 7 year old. I was lucky, the Director gave me a bunch of rolls, I ended up playing the “Fireball” in Rainbow Youth Theatre’s production.

What is your favourite episode of Mr Young that you have acted in thus far and what was the premise?

What do you love most in ranking order being an Actor, Singer or Dancer

Tell me about Tap Dancing, what do you love about it and does it come natural for you?

I started when I was 10 years old, though when I was 6 years old I didn’t have the patience for it. A few years later it came naturally for me and it is something I will do for the rest of my life. Jim Hibbard at Harbour Dance is my teacher and he has worked in the business big time over the years. 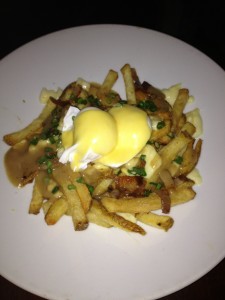 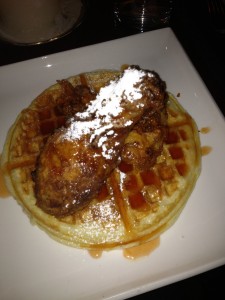 Gig had the Breakfast Poutine and Richard had the Chicken & Waffles.

Is there a role you wanted to play that you didn’t get after auditioning? If so, what was the role and in which play, film or tv series?

Auditioned for Modern Family in the role of ‘Luke’

‘Rita’ did the pilot for a US TV show

How does a Child Actor make it growing up in a small town?

Being home schooled really helps, I had a lack of friends, so I focussed more on work and distractions. I was able to dream big, it’s all about focus, and working as much as you can.

How did you get casted as Derby in the Mr Young tv series?

I got an audition originally for the role of ‘Adam’ and they didn’t’ like me for Mr Young, but for ‘Derby’ the best friend of Mr Young. It worked out perfectly as I love this role being a comedic idiot on the show.

What are 3 of your favourite plays?

What is your favourite musical?

Singing in the Rain

Never give up. If you have something that you love to do, do it cause you know that will make you happy.

I love making people laugh and entertain people, being someone who is physically active I get inspired to do and achieve things.

You said you are learning Japanese now, why?

I really like the culture and the food. I wanted to immerse myself more, I also used to love anime films.

What do you strive for?

Always being better at what I do.

Trying to get work in LA, I have no idea where I will be next. Graduating high school is next for me.

For Reservations, don’t call them, best to email reservations@housexguest.com