For my thirty seventh brunch in this series, I was joined by CTV Morning Live, Co-Host Norma Reid, at Forage in Vancouver talking about TV, Reporting, the News and more. 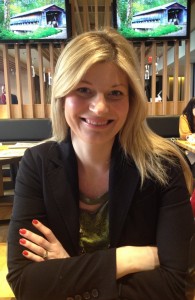 Norma’s broadcast career started at 900 CKBI Radio in Prince Albert, Saskatchewan. With no formal training she was anchoring newscasts within two weeks. She stayed for a year, working her way up to morning news anchor for three stations while also producing her own daily agriculture news segment. Norma then attended journalism school at the University of Regina and graduated with a Bachelor’s degree. During that time she interned at CTV Prince Albert. In her final year of University, Norma worked at CTV Regina as a video journalist, shooting, writing and editing her own stories. She was also an anchor for the late night news.

Upon graduating, Norma worked at CTV Saskatoon where she produced and anchored the weekend news for two years. Norma was also City Hall reporter, covering civic politics, and provincial and federal elections. Norma filled in as weather anchor and hosted a daily noon show, interviewing in-studio guests. In 2009, Norma decided to move to Vancouver and work at CTV British Columbia as a writer/reporter for CTV News. She has been a live reporter for many of B.C.’s big breaking news stories for two years before she started as a Co-Host for CTV Morning Live in November 2011.

Yes and no. Being a journalist was my pipe dream. I was thinking of going to Law school. When I was younger I was interested in being in journalism, it was the curiosity of meeting people, and experiencing many things.

What is it about the news that excites you to report the stories in your profession on TV?

It’s breaking news that is most exciting, telling real people’s stories. There is an adrenaline effect that comes into play. At 10 years old, we got 6 random satellite channels at home and one of the stations was KTLA from Los Angeles, after watching that show, I then wanted to host a morning show.

3)    Ryan Jenkins – one of the most wanted men in America. He was discovered in Hope in a hotel room after he had committed suicide.

Tell me who some of your most notable guests that you have interviewed for the CTV Morning Live show?

1)    Mark Driesen – our weather guy has burst into song and sparked so many crazy experiences.

3)    I was interviewing London consul general of Canada before the Olympics. Fire alarm went off during out live interview and he never flynched.

What is it like to Co-host your show with Aamer Haleem?

It’s awesome and a pleasure. I am blessed to have an awesome team to work with.

I think my upbringing and the remote area I lived in. Always working outwards you want to experience more. I lived in a town of 200 people, you want to be exposed to more.

Back home for Christmas on the farm. 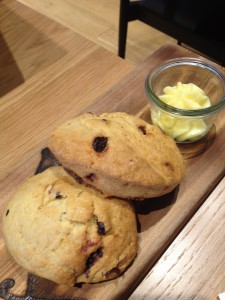 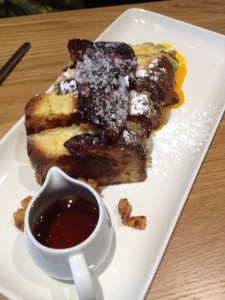 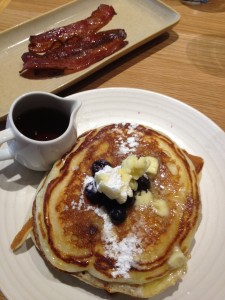 Norma and Richard shared the Chocolate Raisin Scones with butter, Norma than had the Pumpkin Brioche French Toast, ambrosia apple chutney, caramelized bacon and Richard had the Buttermilk Pancakes, valley blueberries, honey butter, maple syrup with a side of caramelized bacon.

Do you read off a script or tv prompter on CTV Morning Live?

For the news I read off the printer. When we are talking to each other it is ad lib.

How have you embraced Social Media with you to your fans?

I treat twitter like a conversation. I am tweeting while I am on the air constantly. Everyday I post a questions off my twitter for people to answer and we read those comments on the air for broadcast. I think our show pushes the envelope with social media, getting to know viewers, and having an important exchange and getting feedback from people. I feel bad if I don’t reply to people instantly, I am on twitter @CTVNorma

Don Lemon at CNN – he is amazing on Twitter.

My grandparents, mom, dad and my husband.